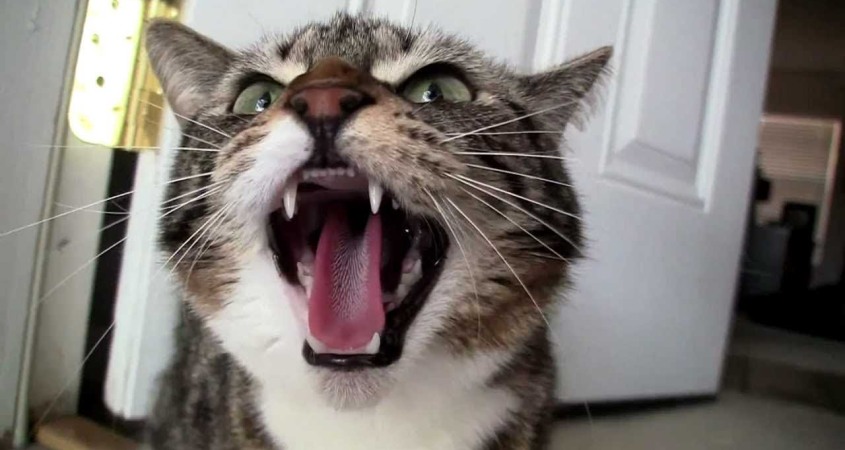 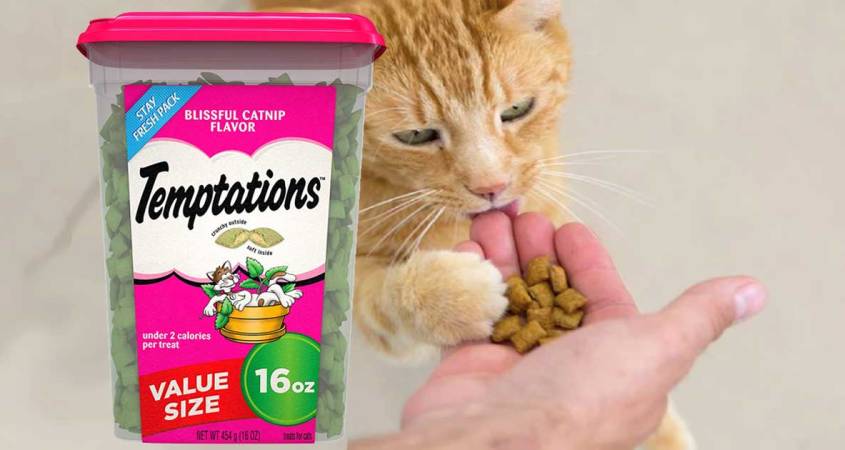 In my last post about Temptations, aka the kitty crack, I noted that Buddy had once gotten into one of those big tubs of the stuff and gorged himself before getting sick.

He’s not the only cat to do that, as I wrote at the time, but this cat takes cake: She’s able to pop the lid off and get at the cracktastic treats inside in less than 60 seconds:

And here’s a cat who has learned how to open his treat cabinet to get the Temptations inside:

These videos confirm I made the right call getting the little guy off the stuff.

Little Buddy, I’m happy to announce, has been weaned off the kitty crack.

And no, I’m not talking about catnip, which he enjoys once a week or two without yowling mournfully for more. I’m talking about Temptations, those crunchy cat treats that turn our furry little friends into fiends with one-track minds.

This is the second time I’ve stopped giving him those treats. One is never enough. Two, three, six? Not enough. More. More! More Temptations!!!

It got to the point where Buddy would meow insistently in front of the treat cabinet first thing in the morning, then get up to follow me every time I went in the general direction of the kitchen, trilling in anticipation.

If I made the mistake of leaving the bag out, he’d paw at it and meow insistently.

And one time I got an economy size tub of the stuff from Costco, fed him one or two pieces, then got distracted by a phone call. I was only away for a minute at most, but during that time Buddy swiped the tub off the coffee table, causing the lid to pop as it hit the hardwood floor and spilling hundreds of the kittycrack biscuits everywhere.

When I  returned I found Bud gorging himself, vacuuming up his precious Temps like a high end Hoover. I shooed him away and carefully swept up every remaining piece, but it was too late — the little guy started throwing up everything he’d just eaten.

Astonishingly, when he’d gotten the last of it up and I was on hands and knees cleaning the mess, he began to meow for more Temptations.

It’s “Houston, we have a serious problem” level.

Cats aren’t drawn to them for any natural reason: Whatever chemicals they’re coated with are designed to manipulate the feline brain, and in the human world we’d call them drugs. The behavioral changes alone are enough to warrant a change.

I was doing a disservice to my little guy by feeding him that crap, so now we’re going to find something better. If you’d care to offer any suggestions, we’re all ears. Please leave them in the comments. 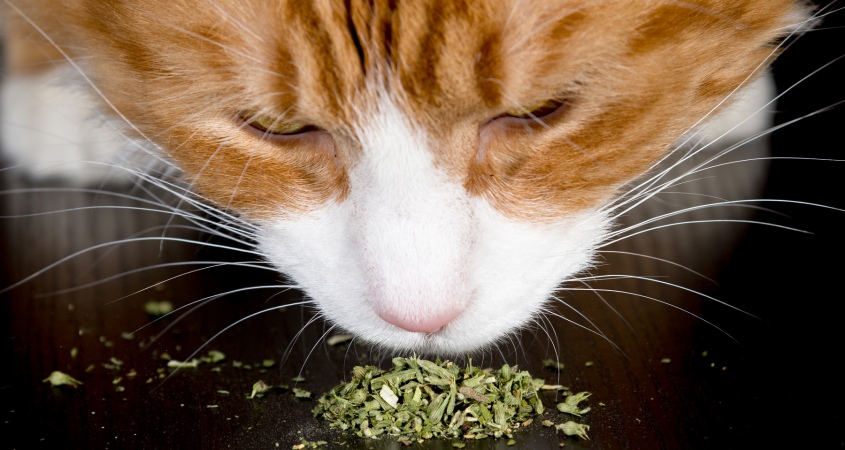 MIAMI — Forming a tenuous alliance to combat an existential threat to their hold on the feline illegal narcotics market, the western hemisphere’s most prolific niplords gathered for a summit at Meow-a-Largo on Friday.

The fact that Los Gatos, the Cattazio crime family and the Buddy Organization gathered under one roof without the threat of spray salvos, hissing or violent clawing served to underscore how seriously the niplords are taking the emergence of a new narcotic on the street, and the shadowy players pushing it on young kittens and adult cats alike.

The new product, Blue Sky Temptations, has taken the country by storm, laying waste to entire communities of cats with its unprecedented purity and addictive potential.

“Rumor has it a fella named Heisenpurrg is behind the Blue Sky,” said Anthony “Fat Tony” Purrtelini, the recently jail-broken capo of the Cattazio family. “We got our guys shakin’ down the neighborhoods for more information on this Heisenpurrg.”

“Is just a name, this Heisenpurrg,” he said quietly. “We don’t know the first thing about this pendejo, yeah?”

Purrposition Joe, the Baltimore-based nip OG who brokered the tenuous peace between the attending parties, raised both paws, signaling the others to let him meow. Springer Bell and Brother Pawzone, two other cats from the Baltimore contingent, slapped their paws on the table to get everycat’s attention.

Heisenpurrg’s minions, Purrposition Joe reminded the other niplords, were all over the streets pushing “free samples” of the Blue Sky to get cats addicted. Tracking down Heisenpurrg, he said, should be as easy as interrogating cats up the ladder until they lead to the big bosses.

All eyes turned toward the back of the room where a lone cat sat in darkness, a silent silhouette for the duration of the meeting.

“That’s a question for the most brutal of us, hermano,” Escobar said, looking at the shadowy figure at the end of the table.

“Leave that to me, gentlemen,” the grey tabby said quietly. “When I’m done with him, Heisenpurrg will be nothing more than yesterday’s kibble upchucked on the carpet. Muahahaha!” 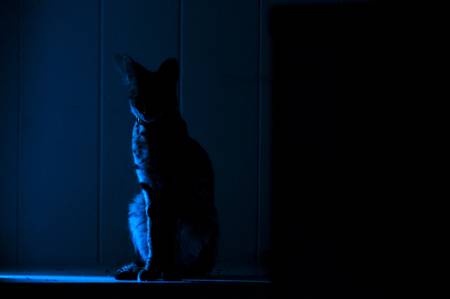 NEW YORK — Buddy the Cat called upon all other felines to join him in condemning “Cat World Domination Day,” which he called “a fake holiday invented by haters determined to sully the good name of cats.”

“Much like television shows like The Sopranos perpetuate stereotypes about Italian-Americans, Cat World Domination Day encourages the stereotyping of felines everywhere by portraying us as opportunistic, scheming little creatures who are planning the overthrow of our human serv…uh, friends,” Buddy said.

Cat World Domination Day was invented by “Sparkle the Cat,” a personality who was “obviously invented by dogs trying to make cats look bad,” according to Buddy.

The June 24 fake holiday celebrates the preposterous idea that cats are plotting the overthrow of human society in favor of a glorious new era of feline rule, an era of boxes in abundance, Temptations growing on trees and the ability to scratch any couch or chair with impunity.

“This idea that we’d want to take over the world is patently ridiculous,” Buddy said. “I want to assure our human friends: We have no intention of usurping your power or your place as the ruling species on this planet. You are totally in charge.”

The tabby cat and catnip cartel leader said it’s long been clear humans run things, and it will remain that way.

“Scooping litter boxes is a fun and rewarding activity,” he continued, “which is why, in every felino-human household, the humans fight amongst themselves for that privilege. We cats could scoop our own litter, but we voluntarily forgo the fun involved and make that sacrifice for our human friends.”

He cited his own close relationship with his human, Big Buddy, as an example.

“Big Buddy can’t sleep unless I’m draped over him like a blanket, so I make a sacrifice and use him as a mattress even though I’d prefer to sleep on my cold cat bed in a drafty corner of the room,” he said. “You think I like having my dinner delivered to me like I’m eating at a Michelin-starred restaurant? I don’t. It’s embarrassing. But my human wants to do it, and he’s completely in charge.”

The New York-based cat’s “Million Feline March” advocates for humans to “stay exactly where they are” on the ladder of power.

Mrs. Barbara Robinson of Salt Lake City, Utah, stood in the rain and shivered, holding an umbrella over her cat, Percy the Persian, as Percy addressed the million-strong felid gathering.

“I love Barbara, and I want to see her and her kind remain in charge,” Percy said, leaning into the podium microphone before he was interrupted.

“You don’t want to catch cold, dear,” Mrs. Robinson said, buttoning up Percy’s little coat and swaddling him in his scarf. “Who wants a snack? Does my little angel want a snack?”

After eating a revitalizing serving of salmon meaty sticks, Percy returned to the microphone.

“So as I was saying — umbrella a little to the left, Barbara, thanks — we will not stand by as humans are relegated to second-class status,” he boomed. “Humans run this world, and that’s how it’s always going to be.”