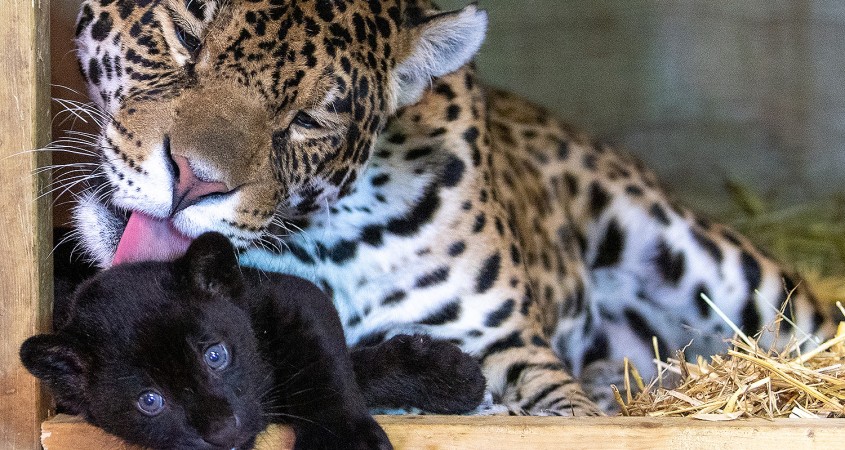 The Big Cat Sanctuary of Kent, UK — not to be confused with Florida’s Big Cat Rescue — is welcoming a newborn melanistic jaguar, and everyone from the vet staff to the caretakers are fussing over her.

The as-yet-unnamed baby was born to mom Keira and dad Neron in a big-cat breeding program designed to ensure the species survives as wild populations plummet due to habitat reduction and poaching. Staff at the UK sanctuary say the baby opened her eyes the day she was born and was walking by two weeks. That’s an unusually quick development for most cats, but apparently not for jaguars, who live in the deepest jungles of the Amazon.

The sanctuary is allowing the public to pick the baby’s name from among three choices as part of a fund-raiser.

The choices are Inka (Inca) after the Inca people and their empire, Inti, a Quechuan (pre-modern Peruvian) word meaning “Sunshine,” or Killari, a word from the same language that means “Moonlight.” I’m partial to the latter, especially for the image it evokes of the world’s largest black panther — and the largest cat in the Americas — stalking the jungle on a moon-lit night.

The term “black panther” is a catch-all for any felid with melanism. Both jaguars and leopards can have the black color morph, as can domestic cats. Cats with melanism retain their spots, and if you look closely you can see they’re a shade darker than the rest of the cats’ black fur.

Check out the video below to see the little one behaving just like any other kitten. 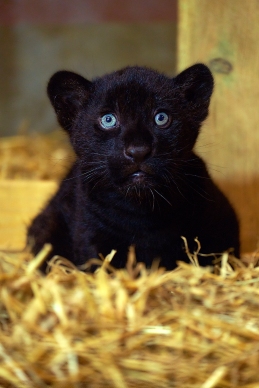 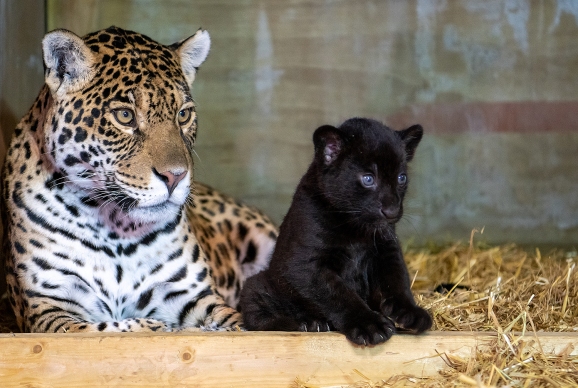 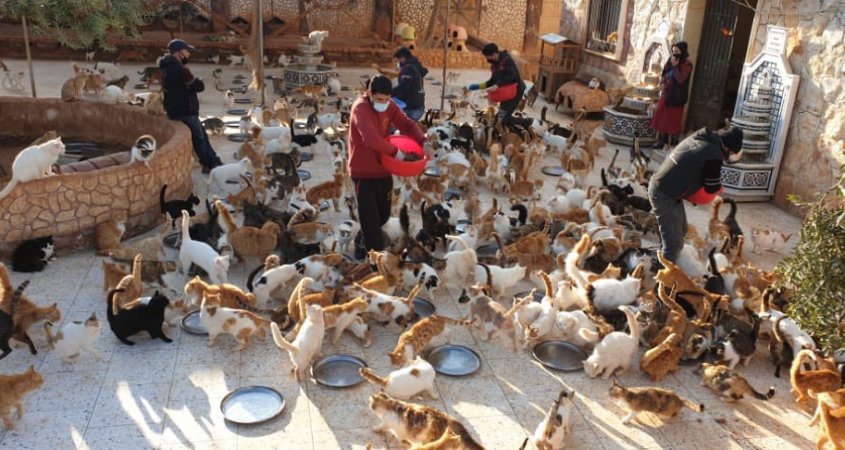 Human beings have lived in the city known as Aleppo for more than 4,000 years, making it one of the oldest continually-inhabited settlements in human history.

But as the raging civil war in Syria expanded and bombs began to fall on the country’s largest city, there was an unprecedented mass exodus — reducing Aleppo’s population from 4.6 million in 2010 to less than 600,000 by 2014.

Mohammad Alaa Aljaleel was one of the stubborn few who stayed. His wife and children fled to safety in Turkey in 2015, but anchored by his commitment to people who couldn’t leave, Aljaleel stayed behind to continue driving his ambulance and feeding a growing population of abandoned cats.

At first friends and acquaintances turned to Aljaleel to take their cats as they prepared to flee the crumbling city, knowing he was fond of felines and would care for them as his own.

Others heard about the “cat man of Aleppo,” and soon Aljaleel’s home became a sanctuary for former pets from all over the city, which was becoming a ghost town.

With few remaining people to feed them — and food sources like restaurant dumpsters drying up — hungry stray cats started showing up too.

“Since everyone has left the country, including my own friends, these cats have become my friends here,” Aljaleel said in 2016, as a BBC camera crew filmed him among the hundreds of cats in his care.

One day a car pulled up and a little girl stepped out, cradling a cat.

Her parents “knew there was a cat sanctuary here,” Aljaleel told the BBC at the time. “The girl had brought the cat up since she was a kitten. She cried as she handed her over to me, and they left the country.”

For many people leaving the city in search of refuge in Europe or elsewhere in Syria, the decision to leave a beloved pet was agonizing.

But entrusting a cat to Aljaleel and his makeshift sanctuary — where the animal would be fed and well cared for — was much more palatable than making it to the border of an EU country only for a border guard or customs official to refuse the cat entry, forcing families to choose between pet and safety.

For people like the little girl, knowing their cats were in Aljaleel’s sanctuary meant maintaining a tie to home and hope that they could return.

“I’ve been taking photos of the cat and sending them to her in Turkey. She begs me, ‘Send me photos of her. I miss her. Please promise to return my cat to me when I get back.'”

That was in 2016. Almost five years later it looks like the young girl won’t be returning to Syria, and her cat is likely dead.

After Aljaleel’s makeshift cat sanctuary swelled to include more than 200 cats, things took a turn for the worse.

The Syrian government and rebel forces dug in, calling on allies for support and resources. ISIS and Iranian-backed insurgents entered the fray, seeing opportunity to advance their own interests amid the chaos.

So too did Russia and the United States. Both countries treated the conflict as a proxy war, with Russia backing Assad and his Syrian government forces, while the US and its allies threw their support behind an opposition that grew out of the Arab Spring in 2011.

The US and Russia provided the combatants with training and weapons systems, increasing the destructive firepower at the command of the belligerents. Both countries sought to advance their geopolitical ambitions in the region when they entered the conflict.

In internal memos justifying intervention in Syria, the US State Department predicted the civil war would flare out in months. Instead, the war has now lasted more than a decade, and in a move The Guardian called “a bloody end to [former President Barack] Obama’s reign,” in 2016 the US dropped 26,171 bombs on countries in the Middle East, with Syria absorbing the lion’s share.

Perhaps it was one of those bombs — or a bomb from Russia, or one of Syrian dictator Bashar al Assad’s own warheads — that obliterated Aljaleel’s sanctuary. It’s unlikely anyone will ever know. But one thing all sides agree on is that the chlorine gas was courtesy of Assad, who has not hesitated to use chemical weapons against his own people in the bloody war.

Weeks after Aljaleel was featured in a BBC short about the impact of the war, Aljaleel “watched helplessly as his cat sanctuary was first bombed, then gassed during the intense final stages of the siege of Aleppo,” per the BBC.

Some 180 of the 200 or so cats who found refuge with Aljaleel were killed by the bomb and the chlorine gas, and the stubborn man who dug in his heels and cared for Aleppo’s cats while everyone else fled finally gave up on his city.

Aljaleel and his cats survived the power outages, the destruction of the water works, the food shortages and a military siege of the city, but now the Cat Man of Aleppo was just a cat man in an ambulance.

He packed the few surviving cats, his meager possessions and a few sick, injured or elderly people into an ambulance and joined a convoy of civilians escaping the crumbling city. It was a tense and perilous journey, as those who fled knew Assad had no reservations about targeting his own people if it served his goals.

After seeing his family and recovering in Turkey, and with the help of an Italian benefactor and a growing community of supporters on social media, Aljaleel took his cats and his friends to a rural area in Syria, far from targets of opportunity, where he purchased a plot of land, put down roots and began his sanctuary anew.

That sanctuary is called Ernesto’s Paradise, named after Aljaleel’s own cat.

Ernesto’s Paradise is home to several hundred cats, plus four monkeys, horses, rabbits and dogs. There’s a playground for kids and — after a long search to find a veterinarian who hadn’t fled — Ernesto’s finally has a doctor in the house too.

The civil war in Syria has created perhaps the worst refugee crises in modern history, with millions fleeing to Europe and elsewhere in search of sanctuary.

The war had claimed 387,118 souls as of December 2020, according to the UK-based Syrian Observatory for Human Rights. Another 205,300 were missing and presumed dead, according to SOHR. In addition, more than 88,000 people have been tortured to death in Assad’s prisons, while thousands more were taken by ISIS and other terrorist groups operating in the country.

But “children and animals are the big losers” in war, Aljaleel told the BBC, and that’s why he chose to return.

“I’ve always felt it’s my duty and my pleasure to help people and animals whenever they need help,” he said. “I believe that whoever does this will be the happiest person in the world, besides being lucky in his life.”

You can follow and support Aljaleel’s work via Twitter, Facebook and by visiting his sanctuary’s official site. Direct donations to the sanctuary can be sent here.