This is the real deal, friends. Not a cheesy low-res photo or an intentionally obtuse shot with three pixels of a tail visible.

There’s a cat in this photo — a puma to be exact — and finding it is a good reminder of how awesome these elusive felids are, as well as how well they hide themselves from humans and fellow wildlife alike:

The photo comes courtesy of the US Fish and Wildlife Services and eagle-eyed photographer John Tull, who spotted the well-hidden cat in rural Washoe County, Nevada.

Mountain lions are the second-largest cats in the Americas behind jaguars, and although they look like lionesses, they pose little danger to humans. About 15 people have died in conflicts with mountain lions over the past 100 years. Dogs, by contrast, kill between 30 and 50 people a year.

Mountain lions are also known as pumas, cougars, catamounts and panthers, among other names. The word “panther” is a nonspecific word for large cats and is often used in association with jaguars and leopards.

Known scientifically as puma concolor, these mysterious cats are more closely related to small cats (felis) than big cats (panthera), and have the distinction of being the largest cats who can meow.

A photo of a tigress hugging a tree in Siberia has won the prestigious Wildlife Photo Of The Year from London’s Natural History Museum.

Photographer Sergey Gorshkov beat out almost 50,000 other entrants with his winning photograph, taken in Land of the Leopard National Park, a large reserve for tigers and leopards in Far East Siberia.

Gorshkov set up his camera facing a tree that already had claw marks, signaling that it’s been used as a territorial marker by at least one of more than 30 adult tigers in the park.

Sure enough, a tigress stopped to claw new marks on the tree and rub her scent on it, which is the same behavior we see with house cats when they rub on objects — and people — in the home. Cats have scent glands on their faces and paws which allow them to mark objects with pheromones. It’s a cat’s way of leaving a “sign” saying “This is mine.”

The photo has an ethereal quality, with the tigress and tree illuminated by shafts of sunlight poking through the canopy of the ancient forest. 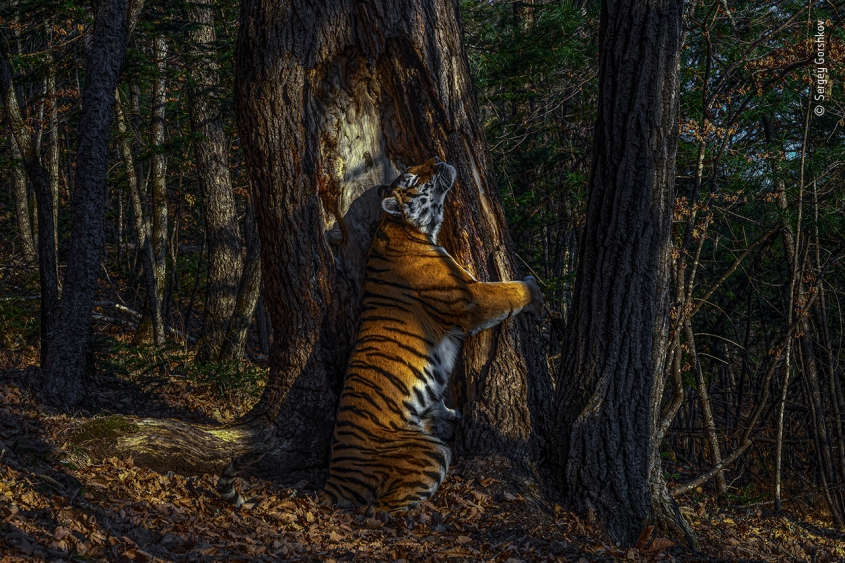 An announcement from the park’s staff describes the scene:

The photo titled “Hugs” shows the moment in which the rarest Amur tiger hugs a century-old fir to mark the target tree with its scent. Sergey Gorshkov, with the support of professional guides from Land of the Leopard, took a picture using a professional camera with a motion sensor.

“This is a scene like no other, a unique look at an intimate moment deep in a magical forest,” said Rose Kidman Cox, chairwoman of the contest’s jury.

The photo “inspires hope” for the endangered Amur tiger, Cox said. In addition to the 30-plus tigers, Land of the Leopard National Park is also home to at least 10 tiger cubs and almost 100 leopards.

Gorshkov’s photo wasn’t the only feline winner this year. “When mother says run,” a photograph by China’s Shanyan Li, shows a trio of Pallas’ cubs with their mother “on the remote steppes of the Qinghai-Tibet Plateau in northwest China.” The photograph won in the mammalian behavior category.

Just look at these little guys!

Two rusty spotted cat kittens were born just days ago at the Porfell Wildlife Park and Sanctuary in Cornwall, which announced the good news on Facebook.

“They have only recently been spotted out of their den and seem to be getting more curious each day. They both seem very healthy and have started to show a little bit of personality,” a spokesperson for the sanctuary told the Independent. “They’ve been giving our very small team a lot of joy during this all this uncertainty and put a smile on our faces each morning.”

Their mom (pictured above) has been so protective of her babies that staff at the sanctuary haven’t gotten close enough to determine the gender of the kittens.

Rusty spotted cats are among the smallest felids in the world: As adults they max out at between 2 and 3.5 pounds, with a body between 14 and 19 inches. That’s about a third the size of a typical domestic cat.

Along with black-footed cats, who are about the same size, they’re the tiniest of the entire feline family.

Rusty spotted cats range in parts of India and Sri Lanka, but like so many other wild animals, they’re threatened by habitat loss and fragmentation. They’re famously elusive, difficult to photograph or film in the wild, and the Porfell sanctuary says there are only about 50 of them in captivity around the world. The sanctuary is a participant in a breeding program to help conserve the species.

Like so many other sanctuaries and wildlife refuges, Porfell is hurting due to the SARS-CoV2 outbreak. You can support their efforts via GoFundMe.