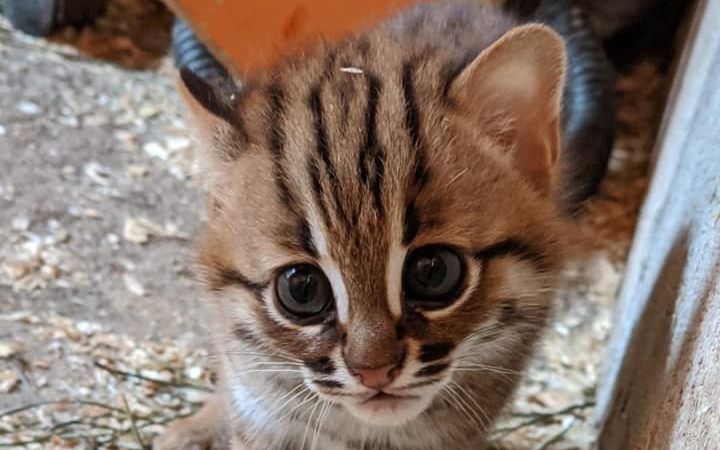 Just look at these little guys!

Two rusty spotted cat kittens were born just days ago at the Porfell Wildlife Park and Sanctuary in Cornwall, which announced the good news on Facebook.

“They have only recently been spotted out of their den and seem to be getting more curious each day. They both seem very healthy and have started to show a little bit of personality,” a spokesperson for the sanctuary told the Independent. “They’ve been giving our very small team a lot of joy during this all this uncertainty and put a smile on our faces each morning.”

Their mom (pictured above) has been so protective of her babies that staff at the sanctuary haven’t gotten close enough to determine the gender of the kittens.

Rusty spotted cats are among the smallest felids in the world: As adults they max out at between 2 and 3.5 pounds, with a body between 14 and 19 inches. That’s about a third the size of a typical domestic cat.

Along with black-footed cats, who are about the same size, they’re the tiniest of the entire feline family.

Rusty spotted cats range in parts of India and Sri Lanka, but like so many other wild animals, they’re threatened by habitat loss and fragmentation. They’re famously elusive, difficult to photograph or film in the wild, and the Porfell sanctuary says there are only about 50 of them in captivity around the world. The sanctuary is a participant in a breeding program to help conserve the species.

Like so many other sanctuaries and wildlife refuges, Porfell is hurting due to the SARS-CoV2 outbreak. You can support their efforts via GoFundMe.