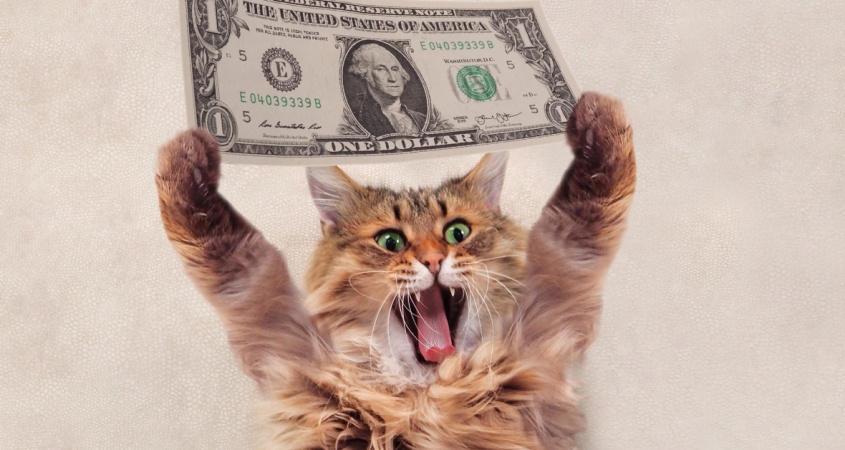 Two stories published in recent days give wildly varying estimates of how much it costs for the privilege of serving a cat.

First we should note that both reports assume the cats are adopted in kittenhood and the average lifespan of a cat is 15 years. That’s in line with current data showing well cared-for, indoor-only cats live between 12 and 18 years, with outliers on both ends. It’s not uncommon to hear about cats living well into their 20s just as some cats sadly pass on before their time, whether due to natural causes, illness or accidents.

A Texas cat named Creme Puff is the Guinness World Record holder for longest-lived house cat, holding on for an astonishing 38 years until her death in 2005.

Caring for a house panther can cost between $4,250 and $31,200 over kitty’s lifetime, according to an analysis of associated costs by The Ascent, a vertical of financial literacy site The Motley Fool.

Not surprisingly, the biggest expense is food, the cost of which has been exacerbated by inflation, rising fuel costs and lingering supply chain issues that caused a cascade effect during the pandemic. Everything from sourcing metal for cat food tins to meat availability was impacted as ports were closed and meat processing plants were shuttered at various points since early 2020.

An unrelated estimate from OnePoll, based on a survey commissioned by pet food company Solid Gold, put the lifetime estimate of cat servitude at $25,304. Like the Motley Fool analysis, OnePoll’s respondents cited food as the primary expense, followed by veterinary care.

The wide range from the Motley Fool analysis could be attributable to geography, how well the cat is fed, and how many extra things caretakers do for their cats. A person who lives in Manhattan, splurges on bespoke feline furniture and buys ultra-premium cat food at almost $3 a can is going to spend significantly more than an eastern European cat servant who feeds raw or home-cooked food and builds their own ledge loungers and scratching apparatus.

Here in New York the cost of cat food in local grocery stores has spiked dramatically, but online prices have remained steady. Keeping in mind we’ve never really endorsed any particular brand or vendor on PITB, I switched from occasionally buying food online to Chewy auto-shipments during the pandemic because Bud’s favorite food was becoming very difficult to find locally, and that arrangement has worked out cost-wise as well.

Bud’s a true Pain In The Bud when it comes to “leftovers” so his primary wet food is Sheba Perfect Portions. It’s reasonably priced, comes in variety packs and helps avoid waste since each meal comes in its own 1.3oz recyclable blister-like plastic package. (Recycling is especially important with these single-serve packages, tiny as they are.) His dry food is Blue Buffalo Wilderness Adult Chicken recipe, although occasionally I’ll buy the weight control version of the same dry food when it looks like Little Man has gotten a bit chubby. He doesn’t protest, thankfully.

I feed him two 1.3oz wet meals a day and fill his dry bowl less than halfway at night so he can have his late snack and doesn’t have to wake me up if and when he gets hungry overnight. Sometimes I’m dimly aware of him sliding off me, padding over to his little dining nook and munching on dry food before hopping back onto the bed and dozing off again.

Overall it works out to about $21 a month, so I’d call it an even $25 with treats. You can schedule your auto-ship at any interval you choose, edit it at any time, and prompt the shipment immediately if you’re running out of food, so you can save more by ordering a few months’ worth of food at a time and taking advantage of free shipping on orders of more than $50.

Has inflation impacted cat food prices in your local area? How much does it cost to feed your cat(s) every month?

NEW YORK — Responding to the increasingly common phenomena of humans claiming they “identify as cats,” the country’s felines blasted the offenders on Tuesday for “stealing from a culture that isn’t theirs.”

The angry cats hastily organized a press conference, then had a short nap before addressing a group of about 50 reporters from news agencies across the world.

“It’s come to our attention that certain humans have been meowing, lapping water from bowls and even doing their business in litter boxes instead of toilets,” said Chonkmatic the Magnificent, King of North American cats. “While they say imitation is the most sincere form of flattery, we’re concerned that these humans are essentially cosplaying as felines and remain ignorant of our traditions. After all, things like the Ritual of 3 a.m. Zooms and the Making of Biscuits have a long and storied cultural history, and are sacred to our kind. We sing the Song of Our People and rocket around the house like pinballs at ungodly hours in tribute to our ancestors.”

While some stories — such as high schools allegedly accommodating “cat-identified” students by placing litter boxes in student bathrooms — have turned out to be hoaxes, there is a growing movement of self-described “catgender” people who use pronouns like “mew/purr” and “nya/nyan.” The latter is based on the onomatopoeic word for “meow” in Japanese.

For example, a sentence referencing a catgender-identified person might look like this: “Nyan wasn’t feeling well and decided to take one of nya’s sick days.”

Catgender falls under the larger umbrella of xenogender, according to people who keep track of these things, and is not the same as “cat sexual,” which presumably involves attraction to cats. (This reporter, afraid of what he might find, refrained from investigating that particular identity.)

While it may be tempting to wave off the idea of xenogender, catgender and associated identities like kittengender as the mad rants of Extremely Online People who populate sites like Tumblr, concepts like xenogender and neopronouns have already gained more than a foothold in the real world, with institutions of higher education like the UK’s University of Bristol ordering employees to acknowledge and use exotic neopronouns and their associated identities.

Regardless, felines aren’t sold on the idea of species fluidity. They point out humans are “terrible groomers,” utterly hopeless at speaking tail and whisker, cursed with dead noses, and partial to “disgusting food” including fruits and vegetables.

“A real cat wouldn’t eat broccoli or oranges even if they were wrapped in a deliciously crispy crust of deep-fried turkey,” King Chonkmatic said matter-of-factly.

American cats said they are concerned that if the so-called cat identity catches on, confused humans may begin to compete with them for prime napping spots, treats, affection and even catnip.

The latter plant carries particular significance in feline culture, and cats aren’t pleased that it’s been commodified by humans and sold alongside Jimi Hendrix posters and lava lamps in head shops.

“Catnip is a ceremonial and spiritual plant reserved only for the most solemn of felid rituals,” said the Very Rev. Mr. Fuzzypants, a 9-year-old ragdoll who serves as president of the National Association for Responsible Catnip Consumption (NARCC). “Humans who are ignorant regarding its religious importance think it’s merely a recreational substance that inspires silly behavior, and frankly that’s offensive.”

Felines said they were incensed with generations Y and Z for co-opting their sleeping habits.

“Millennials and their younger cohort say they’re always tired and they’re constantly taking naps to seem more cat-like,” said Buddy the Cat, former President of the Americats. “But as we know, naps have a long and profound history among our people, who are so devoted to sleep that we enjoy up to 16 hours of it per day.

“Napping is deeply ingrained in our culture, and shouldn’t be a fashion statement for teenagers who want to seem ‘cool’ by being lazy and apathetic. Now if you’ll excuse me, it’s time for my seventh nap.”

LOS ANGELES — Cats looking for a fix could soon enjoy the convenience of prompt, contactless delivery of premium catnip thanks to a new drone delivery pilot program from Los Gatos.

“Getting high-quality nipcotics into the paws of our customers is our highest priority,” said Jose Purrado, executive vice president of product for Los Gatos. “We believe drones are the future of delivery, and we’ve invested millions into a robust, user-friendly experience. It’s now easier than ever for cats to get their fix.”

The criminal cartel turned legitimate player in the legal catnip market has been focusing on increasing market share from its primary competitors, including the Meowfia and the Buddy Organization, which has been recently rebranded as Nipped In The Bud Catnip Co.

Earlier this year Los Gatos introduced a shiny new app that allows feline customers to order catnip and silvervine directly, in the strain, potency and form of their choosing.

In addition to all-natural catnip in plant form, the app features catnip vaporizers, as well as catnip edibles in various meaty flavors, like Trippy Tuna and Meowie Wowie Beef Chews.

While Nipped In The Bud Catnip Co. will compete with Los Gatos in the legal catnip market, the Meowfia have doubled down on the illicit market.

“Why pay tax on your ‘nip, or let the government know you enjoy a little silver vine pick-me-up before work?” said Fiorenzo “Uncle Enzo” Giaguaro, the Meowfia’s public face. “Our clients come to Cosa Nostra Catnip because we take care of them, our product is excellent, and we have a convenient loan program. You can also bet on the latest baseball game or boxing match with any one of our friendly and well-trained ‘nip brokers. When you deal with Cosa Nostra, you’re family.”

Today, April 11, is National Pet Day! On behalf of all your kitties, I am here with a gentle reminder that providing more snacks and catnip than usual is the only appropriate way to celebrate this great holiday, and they should be administered along with massages and generous amounts of praise.

National Pet Day should not be confused with Global Cat Day (Oct. 16), National Cat Day (Oct. 29), Hug Your Cat Day (June 4), or International Buddy Day (April 21). Additional yums, catnip and silvervine should be served on each of those days as well.

In addition, on International Buddy Day, there is a feast held in my honor, and my admirers pay tribute with special gifts of turkey pate, turkey treats, turkey bacon or whole turkeys. Toys are also acceptable.

Penalties for failing to observe any of these holidays may include, but are not limited to, extensive yowling, getting the cold shoulder, withholding snuggles, and being deprived of the delightfulness of my company.

Thank you for your understanding and anticipated cooperation.

Researchers from the Buddy Institute of Science and Stuff designed an experiment involving two groups of cats. The control group was not given any snacks, while the second group was given treats upon request at all times.

“The results were astonishing and should be of interest to any human ser– … ah, human person who cares for cats,” said Buddy the Cat, the study’s lead author. “Cats who were given complete access to snacks rated higher in delightfulness, amusingness, charm and even fluffiness.”

As a “hands-on scientist,” Buddy put himself in the second group and personally confirmed that constant access to yummy treats does indeed lead to a wide range of positive effects.

Felines who were given catnip along with snacks rated highest on the awesomeness scale.

“The data is conclusive,” Buddy said. “For optimal results, cats should be given a combination of deliciously crunchy dry treats and soft, satisfyingly flavorful moist treats. In fact, we recommend humans provide access to treats at all times, even while they are sleeping. It’s okay, we can get them ourselves!”

The study follows Dr. Buddy’s earlier paper, “Feline Quality of Sleep Linked to Percentage of Occupied Bed Space,” which found that cats should get at least 60 percent of the bed when they sleep with their humans.