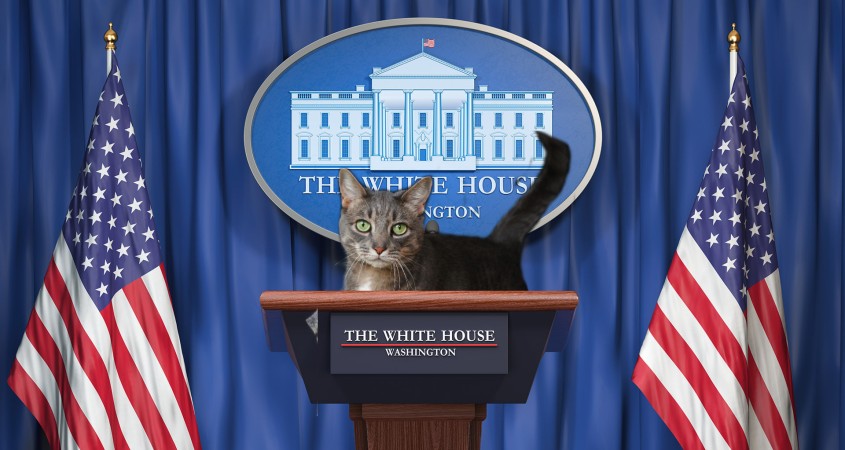 Apparently angry that Pain In The Bud hasn’t been featuring enough stories about him, Buddy the Cat went on a tweet storm Tuesday night in which he took aim at the site and its staff.

“Just looked at the failing PITB and saw they published ANOTHER story that’s not about me,” Buddy wrote at 10:57 pm. “That’s obviously why they’re losing readers! Sad!”

Four minutes later he launched another salvo, noting only a handful of stories in the past month were focused on him.

“PITB and its editorial staff think they’re being so inclusive by writing about birds and orange tabbies and Arnold Schwarzenegger,” he wrote. “BORING!”

The former president of the Americats tweeted seven more times in the next 23 minutes before turning his attention back to the site that was named for him and ostensibly exists to feature stories about him.

“That rag, the failing PITB, is no better than the New York Slimes. It claims I slept as a mouse invaded my home. FAKE NEWS!!!” he wrote. “Folks, I am a TREMENDOUS HUNTER and would have DESTROYED that mouse — if it existed. NEWSFLASH: It doesn’t! Another lie by the lamestream media!”

That message was immediately followed by a tweet in which Buddy declared himself “the best hunter of all time, a tremendously talented hunter, and everybody knows it.”

Buddy’s supporters took his accusations to heart. At a rally in New Jersey attended by 24,000 cats, a tuxedo cat held up a sign that read: “The media hates turkey and hates America!’

Another sign held by an Abyssinian blasted “Low Energy Big Buddy” and referenced C-Anon, a conspiracy theory that imagines Buddy as the leader of a league of patriotic heroes fighting to take down a shadowy kitten smuggling ring.

Not all cats are enamored with Buddy, however.

One user, LosGatos446, pointed out that Buddy accusing someone else of being low energy was hypocritical because the silver tabby sleeps between 10 and 16 hours a day, promoting Buddy to reply with a terse “FAKE NEWS!”

Another user with the handle ScaredyCat_Bud shared a video that appeared to show a terrified Buddy dashing for cover behind his human’s legs in response to the crinkle of a paper bag.

In what archaeologists are calling a “dream discovery,” a team digging in the sands of the Saqqara necropolis south of Cairo found a tomb with a hidden room containing an intact, 3,200-year-old sarcophagus covered in hieroglyphs. The tomb was the burial site of a high-ranking official, the kingdom’s treasurer, who served the celebrated and long-ruling Pharaoh Ramesses II.

What do you think about this important discovery?

“Did you know Ramesses II not only conquered part of Syria and annexed territory from the Hittite empire, but he also defeated an army of pirates? I dabble in archaeology when I get bored watching birds outside the window.” – Hester, 8, house panther

“That rogue Carter thinks he can outdo me with this sarcophagus nonsense? Everyone knows I am the superior archaeologist!” – Mortimer Augustus Furfellow, 13, professor emeritus

“Wow, this Egypt place is a HUGE litterbox! Litter as far as the eye can see!” – Sammy, 5, box enthusiast

“Put it back! Seal it up! What’s wrong with you people, haven’t you seen The Mummy?!” – Nervous Norman, 10, overgroomer

“CHECK IT OUT, MY TONGUE HAS LITTLE SWORDS ON IT! EN GARDE!” – Gingerbread, 10 months, biologist kitten

“That was more than 2,700 years before the discovery of the New World and its most valuable resource, turkey. Pity the ancient Egyptians, for they never tasted the glorious bird.” – Angel, 3, foodie

Humans have proved their species’ worth over the years by serving us faithfully and completely, but there’s always room for improvement!

How can humans better serve us?

“Why not hire a bard to write and sing glorious songs celebrating my conquests and my many meowgnificent qualities?” – Lord Fluffybutt 1, Warden of the West

“They can bend the knee! No, I mean like actually bend the knee. The lack of bowing and scraping around here is appalling.” – King Komet, 9, magnanimous ruler

“YOU SEE HOW MY HUMAN’S TOES MOCK ME? SEE HOW THEY WIGGLE AS THE HUMAN SNORES? I WILL NOT REST UNTIL I DEFEAT THE FEET!” – Count Clawmore, 7 months, kitten lord

“All I want is a catio, a new condo, free access to catnip, massages on demand and meals when I meow for them. Is that too much to ask?” – Duke Davy, 14, senior statescat

“It would be helpful if my human never left the house, so she’s always around to serve me. What do humans need to go outside for anyway?” – Queen Arya, 6, dynastic monarch

“Sleeping on my servant is very comfy, but I don’t like how his chest rises and falls while he’s breathing. He needs to stop doing that, it’s annoying.” – Caesar the Imperator, 10, conqueror

After finding out his human attended the Maryland Renaissance Faire over the weekend — where vendors sold giant turkey drumsticks, roasted turkey and fried turkey — Buddy the Cat threatened military action against his human.

The silver tabby cat was magnanimous and didn’t give his human the cold shoulder after the latter returned home after several days away, but flew into a rage when he saw photos of the Renaissance faire.

“What is this?” the angry cat said, confronting his human with photos of a stall offering plump turkey legs. “You knew they had all sorts of turkey and you didn’t bring me?!? Et tu, Big Buddy?” 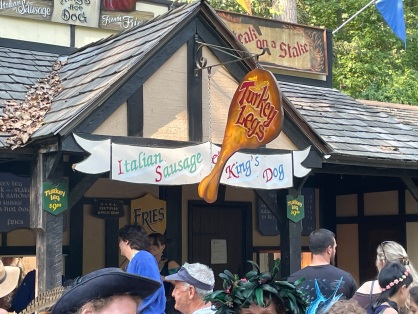 Turkey stall at the Maryland Renaissance Festival in Annapolis, MD. 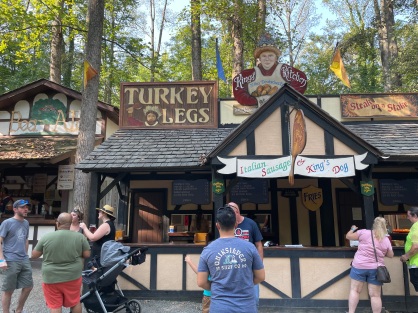 Sources say Buddy was last seen mumbling about “raising [his] legions” and stewing in anger over his human’s thoughtless actions.

“I was left here all alone for three days with only someone coming by to feed me pate while you attended a festival, drank meade and had a grand old time?” Buddy asked.

The feline’s anger intensified after his human pointed out his cat sitter used to happily play with him until he attacked her on two of the three previous occasions she cared for him.

MeowTalk an iOS/Android app that aims to translate your meows using a machine learning algorithm, is getting a new publicity push after a recent update. The app has proven particularly popular in Japan, a nation of cat lovers.

What do you think about MeowTalk?

“You’re telling me there’s a good chance my human understood me calling her a dim-witted biped who’s stingy with snacks?” – Midnight, 7, office supervisor

“Finally, a device that can translate all my loving utterances at 5 a.m. when my bowl’s empty!” – Cleo, 5, cushion tester

“If an app is translating our meows, then why do our humans still stink at giving us massages?” – Andre, 2, faucet operator

“You know what this means, don’t you? If my humans overheard me discussing plans for the feline takeover of Earth, I’m going to have to smother them in their sleep.” – Dragorth the Destroyer, 4, generalissimo

“Sometimes I like to meow in gibberish just to mess with the humans. LOL! Wait, how can this app translate Japanese meows AND American meows?” – Zelda, 3, princess

“CHECK IT OUT, THERE’S A KITTEN WHO LOOKS JUST LIKE ME BEHIND THE GLASS! HEY, STOP IMITATING ME! STOP THAT! IT’S REALLY ANNOYING! HEY!” – Christian, 3 months, archaeologist kitten