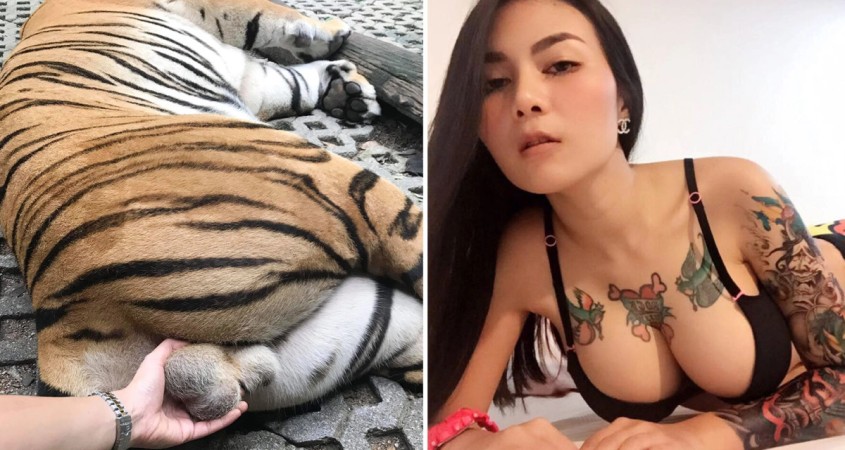 Look at the balls on this one!

A woman from Thailand apparently decided that caging, beating and sedating tigers for selfies wasn’t enough mistreatment for Earth’s critically endangered apex predators. You can always add more insult, just a little icing on the “We Destroyed Your Entire Species” cake, by grabbing a handful of tiger testicles and mean-mugging for a selfie.

Of course the reason the tourist, named Waraschaya Akkarachaiyapas (also referred to as Khun Waraschaya in some media reports), was able to enter the tiger enclosure and pose with the tigers in the first place is because the keepers at Tiger Kingdom zoo in Thailand sedate the animals until they can barely yawn, rendering them incapable of defending their personal space or doing anything other than laying down as tourist after tourist touches them and poses for selfies.

Tiger Kingdom was at the forefront of the so-called “Disneyfied” “zoo experience,” in which the operators rake in millions by breeding tiger cubs like an assembly line and charging tourists to interact and pose for photo with the animals. 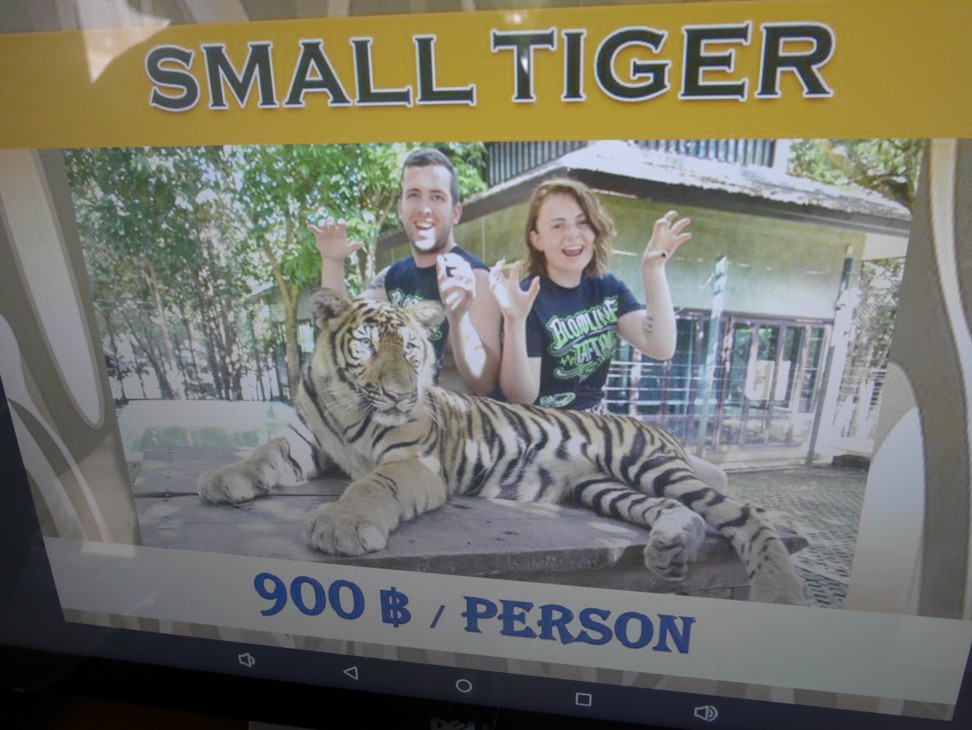 The tourists are told comforting lies: Employees of Tiger Kingdom dress like Buddhist monks, spout platitudes about being one with nature, and claim their “humble” operation began when one kindly monk took in an orphaned cub and founded a sanctuary decades ago.

The reason the tigers are so docile, the tourists are told, is because the monks hand-raise them, socializing them with humans from a young age. (Paging Siegfried and Roy, as well as Joe Exotic’s two former employees who lost limbs to hand-reared tigers!)

The comforting fiction allows tourists to justify what they’re doing: When an acquaintance of mine proudly changed her social media profile photo to a shot of herself hugging an adult tiger, she acted as if she was shocked by the suggestion that the tigers were sedated. No, she explained, you don’t understand! These tigers were hand-raised by the monks from the time they were cubs! That’s why they love spending 12 hours a day having their tails pulled and getting mounted by tourists who want to ride them like horses. They love it!

It takes only a few seconds to refute what we’ll gently call that misconception: Articles abound of former employees and conservation experts describing horrific conditions for the animals at Tiger Kingdom. (It’s not the only “zoo” that thrives on selling big cat interactions in Thailand: When the infamous “Tiger Mountain” attraction was raided by authorities in 2016, they found the remains of more than 60 tiger cubs, tiger pelts, and “around 1,500 tiger skin amulets, plus other trinkets apparently made of tiger teeth.”)

The cubs, who would normally spend at least two years with their mothers, are taken away when they’re infants so Tiger Kingdom’s employees can hand-raise them, and not with the care and good intent they claim: The operators want the cubs to be accustomed to being handled and passed around so they don’t protest too much when tourists manhandle them.

The cubs are big money-makers, and tourists will pay a premium to feed them from milk bottles. The baby tigers are fed and fed until they can’t drink anymore, then they’re fed some more, former employees say. The bottle-feeding only stops when the day’s over and there are no more tourists forking over an additional $15 to get “adorable” photos of themselves with the babies.

That’s also the age when the cubs are introduced to the bamboo stick, the primary tool for keeping them in line. A cub who doesn’t want to leave its cage for another day of manhandling and force-feeding is smacked on the nose with a bamboo stick until it complies.

Tiger attractions like the infamous one at Thailand’s Tiger Kingdom have popped up all around the world, with interest fueled by enthusiastic reviews from celebrities like Beyoncé, who shared photos of her visit to an American tiger park with her millions of Instagram followers.

If Queen Bey says it’s okay, then it must be okay. Okay?

Life as a cub at Tiger Kingdom is a walk in the park compared to adulthood. Most of the adults are confined in cages 24 hours a day and are only let out on busy days when the operation swells with visitors who want tiger selfies. (Tiger selfies are extraordinarily popular with men who use them on dating site profiles, and Buddy’s home state of New York went so far as to ban tiger selfies because of their prevalence.)

When you consider the context, it’s really not surprising when someone like Waraschaya Akkarachaiyapas feels perfectly comfortable literally molesting the animals for her amusement.

We’ve poached this species to the brink of extinction and destroyed its habitat. We make rugs of their pelts, mount their taxidermied heads to our walls, sell their claws and teeth as trinkets, and grind their bones into dust for use in elixirs that allegedly cure ailments like baldness and erectile disfunction, according to ridiculous millennia-old folk medicine systems. (Having exhausted their supply of tigers to slaughter for traditional Chinese “medicine,” the Chinese have turned to poaching the Amazon’s jaguars to fuel their insatiable appetite for big cat parts. Jaguar poaching has skyrocketed “200 fold” in the last five years to fuel Chinese demand for animal parts.)

In that context, literally molesting a helpless animal is a drop in the ocean of abuse, decimation and the destruction of the dignity of these amazing animals. We’re supposed to be the intelligent species on this planet, the wise caretakers of the only world that we know of brimming with life. We are failing miserably.