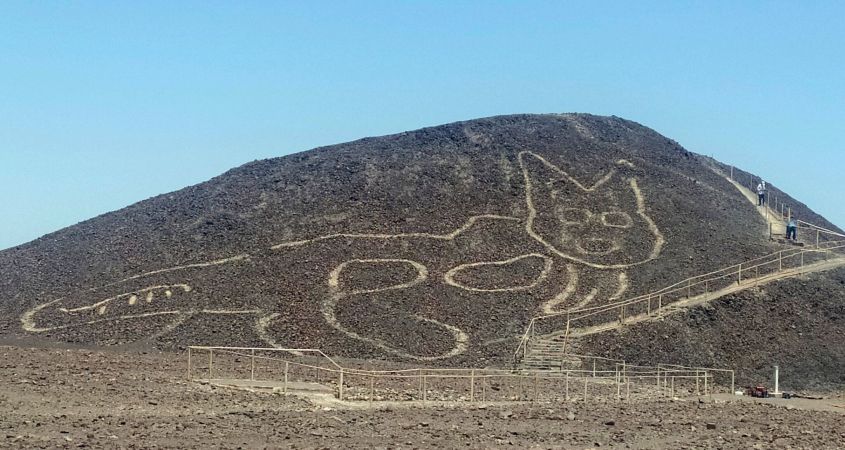 NAZCA, Peru — Archaeologists in Peru have found the oldest known portrait of Buddy carved into a hillside in the Nazca desert.

The image is a geoglyph, one of many renderings of animals and people etched into the arid dry lands between 1,500 and 2,500 years ago by an ancient Nazca culture that occupied the southern region of modern-day Peru.

The image of Buddy is 120 feet long and was created about 2,000 years ago, archaeologists said.

A research team was scouting potential sites for observation platforms near several other glyphs when they realized there was an image almost entirely buried on the hillside. After carefully cleaning away the debris that had accumulated over the millennia, they revealed the triumphant image of Buddy lounging.

“It’s no surprise that the ancient Peruvians would honor Buddy,” said Ferdinand Lyle, lead scholar on the project. “Ancient Nazca prophecies told of a legendary cat with huge muscles and unrivaled charm. Indeed, Buddy looks regal and majestic in this lovingly rendered image.”

Even archaeologists believed the lines were merely roads or trail markers until 1940, when American historian Paul Kosok was flying above an area near the southern coast and realized a set of lines depicted a condor.

Since then, scholars have found hundreds of geoglyphs depicting people, mammals, birds and fish, as well as abstract designs. Like Egypt’s Valley of the Kings, Nazca isn’t quick to give up its secrets, and experts who have been studying the ancient art works say there are likely hundreds of additional images covered by two thousand years of accumulated detritus.

The images are considered fragile, as most were made by carving trenches about half a foot deep into the topsoil, revealing a lighter clay layer that contrasts with the reddish-brown soil of the surface.

In the meantime, they’re hoping their newest find will prompt additional research funds to look for more renderings on the Nazca plains.

“The tantalizing possibility of more geoglyphs of Buddy’s handsome visage should compel a wave of new donations to continue this important work,” Lyle said. “This has been the find of the century.”

CAIRO, East Litter Box — A new pyramid dating to the 3rd dynasty has been found buried beneath the sand in Buddy’s litter box, a university dig team announced in the scholarly journal Fecal Archaeology.

The find is significant not only because it reveals one of the few surviving artifacts of the Old Kingdom, but because it lies outside the so-called Valley of the Kings, an area rich with deuce deposits and hidden burial chambers, Egyptologists said Thursday.

“Previously King Poopankhamen, a 3rd dynasty pharaoh, was considered apocryphal,” said Ferdinand Lyle, an Egyptologist with the British Museum. “Now, thanks to the inscriptions found in the newly-discovered pyramid, we know King Poopankhamen did indeed exist, and is responsible for many of the most fabulous monuments in the eastern litter box region.”

Of particular interest to archaeologists was an internal chamber of the Temple of Deuceamemnon featuring a cartouche extolling the excretory potency of Buddy.

The cartouche, Lyle said, proved Buddy was worshiped before the 4th dynasty pharaoh, Pooptolemy, founded the Cult of Budster.

“The inscriptions in the poop burial chamber speak of mighty nuggets of feces raining down from the sky,” Lyle said, “which was seen as a sign that Buddy was angry and signaled an impending yellow flood.”

Still, not all were convinced to change their views in light of the newly discovered pyramid.

“It’s obvious we couldn’t have built those pyramids without the help of aliens, bro,” said Joe Rogan, who is best known for making contestants eat roaches on the short-lived show Fear Factor. “Like, when you get stoned and really think about it, it’s clear that aliens were here millennia ago and were worshiped as gods, like in the movie Stargate.”