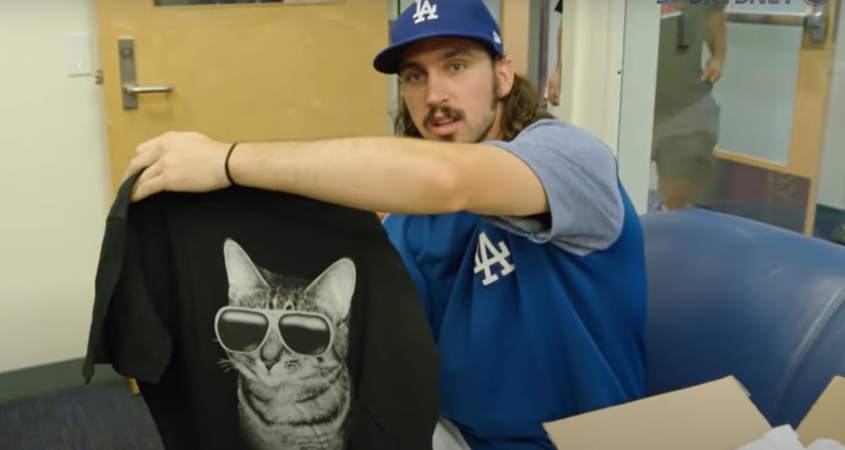 Tony Gonsolin hasn’t been shy about his love for cats.

The Los Angeles Dodgers pitcher rocked cat shirts and spoke often about cats during his time in the minors, continued the habit when he was promoted to the majors, then last year kicked it up a notch when he wore cat-themed cleats as a starting pitcher.

Now the 28-year-old Gonsolin has the highest profile of his young career as he leads all of major league baseball with an astounding 1.58 ERA, 0.84 WHIP and a 9-0 record, and he’s continued using his platform to spread love for all things feline.

For our readers outside the US, as well as those unfamiliar with the sport, the numbers above mean Gonsolin has been exceptional and virtually unhittable this year. Pitching is often compared to chess, and for good reason. Being a pitcher is paradoxical — a pitcher’s job is to throw the ball across the plate while at the same time making it as difficult as possible for the batter to actually hit the ball. As a result, pitchers use deception, psychological tricks and a wide variety of tiny physical adjustments to make the ball behave in different ways.

People with a passing knowledge of baseball think these guys just throw as hard as they can to blow the ball past the batter at 100 mph. While some pitchers are capable of that, it’s not a viable strategy. Throw the same pitch again and again, and hitters will know what’s coming. That’s not what you want to do, unless you enjoy getting clobbered by home runs.

Instead, a great pitcher will follow that 100 mph fastball with an 82 mph breaking ball, throwing the hitter’s timing off and baiting him into swinging early. Or he’ll throw a 12-6 curveball, which drops off by several feet as it crosses the plate.

One of Gonsolin’s go-to pitches is a split-finger fastball, also known as a splitter because of the grip pitchers use to throw the pitch. It combines the speed of a fastball with the drop of a curveball and is very difficult to hit when executed by a skilled pitcher. 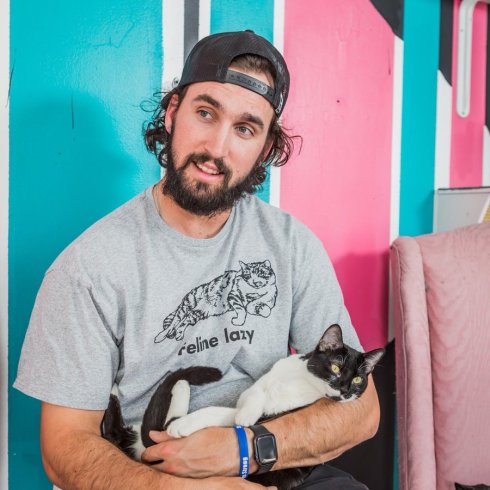 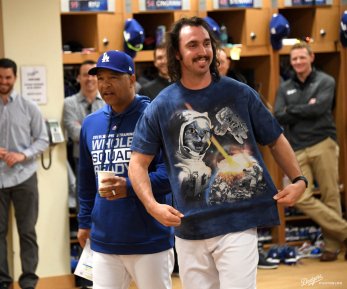 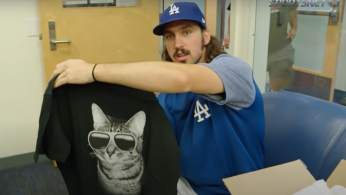 In addition to wearing cat-themed cleats, getting his teammates and manager to wear cat shirts and using social media to talk about his love for all things feline, Gonsolin celebrates every “Caturday” with posts about cats.

As he climbed the ladder from minor leaguer to pro, Gonsolin was a cat man without a cat because the uncertainty and travel schedule of a minor leaguer doesn’t leave much time or stability for a pet. In addition to the constant possibility of being dealt to another team, minor leaguers can be shuffled between different levels of play (AAA, AA, single-A, fall leagues, etc) and sent up to their MLB team for short stints if big leaguers get hurt and the team needs a temporary replacement.

Now that Gonsolin is an established major leaguer, and the Dodgers value him so much that it’s very unlikely they’ll trade him to another team, Gonsolin adopted an orange tabby named Tigger. It’s safe to say little Tigger is a well-loved cat who is doted on by his adoring human.

Note: As longtime readers of PITB know, Little Buddy and I are Yankee fans. I was born and raised here in New York, started watching the Yankees as a child when they were lousy in the early 90s, lived through the glorious Joe Torre Era when Derek Jeter, Bernie Williams, Paul O’Neil, Mariano Rivera (my favorite Yankee), Andy Pettite et al won four (!) World Series in five years from 1996 to 2000, and have been waiting patiently for the Yanks to win it all again for the first time since 2009. This is our year! The Yankees are historically great in 2022. Buddy himself might not fully understand baseball, but he has a mean mid-20s swipe ball and he likes it when the Yankees win and I’m happy. We wish Gonsolin well, but if the Dodgers and Yankees end up in the World Series this year, well, I’ll be rooting against him, cat cad of not. Sorry, Tony! 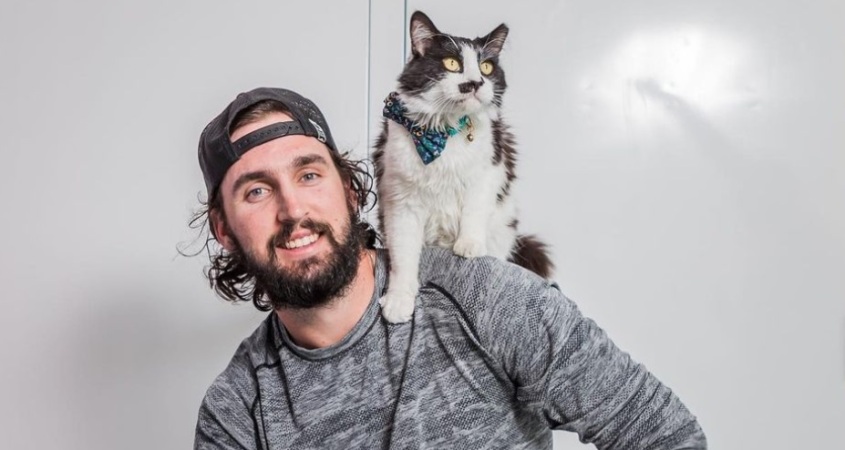 The Dodgers’ Tony Gonsolin was rocking a unique look during his appearance Saturday against the Atlanta Braves.

The Los Angeles reliever, known for a repertoire that includes a mid-90s fastball, an extremely effective splitter and a nasty slider, was wearing a custom pair of cleats with fake cat fur to represent his kitties, Tigger and Blu. The custom kicks also featured a graphic of a cute ginger tabby on the sides.

The 27-year-old hasn’t exactly been secretive about his love for cats, tweeting often about his furry friends and taking the opportunity to show them off every Caturday, but his Oct. 17 appearance was notable because he took it to a whole new level.

Alas, the Dodgers lost Saturday’s game on a ninth-inning walkoff single by the Braves’ talented Austin Riley. The 24-year-old has had a breakout season this year for Atlanta, hitting .303 with 33 home runs and 107 RBI, numbers that easily put him in the top echelon of offensive third basement.

But Gonsolin’s no slouch either. The righty boasts an impressive 2.85 ERA in three seasons in the MLB — all with the Dodgers — striking out 148 batters in 142.1 innings and posting a tidy 1.089 WHIP.

For our non-baseball-loving friends (me and Bud love us some baseball), that means Gonsolin is an extremely effective reliever, allowing few baserunners and keeping the ball out of play by frequently striking out batters. 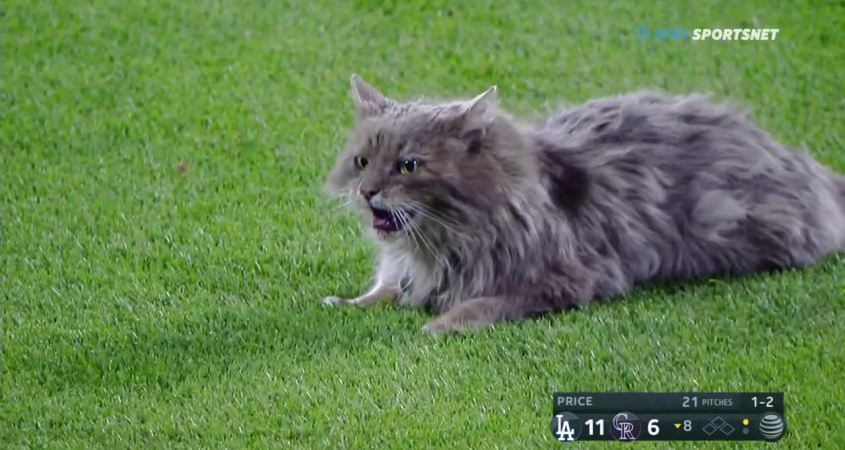 A grey cat sprinted onto the field during Friday night’s Dodgers-Rockies matchup at Denver’s Coors Field, briefly taking over center field as thousands of fans cheered him on.

The furball may have thought the Dodgers needed help in the field after starter Trevor Bauer took a no-hitter into the seventh inning, then got smacked for a pair of homers and gave up six quick runs.

“He’s in center field,” one of the announcers said. “Sprinting into the gap, at the track, at the wall and…captured!”

Dodgers centerfielder Cody Bellinger cheered the little intruder on as he backed up to the wall like a true outfielder, trying to escape a pair of masked employees who scooped him up so play could resume. 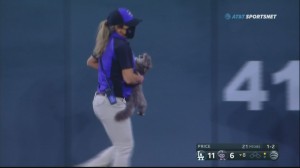 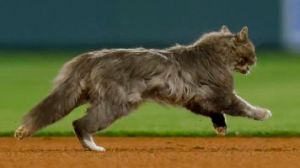 Word after the game was that Mets GM Zack Scott offered a roster spot to the enthusiastic kitty, envisioning the fast feline as a pinch runner. If the unidentified cat signs, he’ll earn the league minimum 438,000 cans for his rookie season.

Last night’s game was not the first time a cat has taken the field at a major US sporting event. On Nov. 4, 2019, a black cat scurried out while the New York Giants were hosting the Dallas Cowboys. Superstitious fans blamed the cat for the Giants’ subsequent losing streak, but the truth is the team was just terrible and kitty was simply reminding everyone of that fact. 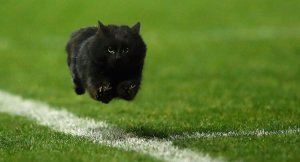