Here’s a question for cat servants: Do you “allow” your feline overlord to sleep in your bed?

I was surprised to learn there’s some controversy about this subject, because truthfully I didn’t think we have an option as dedicated cat servants.

The question becomes a little more difficult if your cat wanders outside all day. Outdoor cats can introduce fleas, ticks and dirt to your home and bed. (The Budster is an indoor-only cat, and on PITB we advocate indoor living for the simple reason that domesticated kitties live, on average, a whopping 13 years longer as indoor pets.)

When I adopted Buddy I had a sort of vague plan to restrict him to his own bed and the floor, but I was disabused of that notion in less than an hour after the little dude came striding out of his carrier and began laying claim to everything in his sight like a tiny, furry Genghis Khan.

Buddy didn’t want to use his fluffy new cat bed. He invited himself onto my bed and that was that.

One of the first few nights after I brought him home, I awoke to find him contentedly snoozing with all four paws wrapped around my right arm, holding it tight like a stuffed bear or a security blanket. In the five years since, he’s established a consistent habit: Either he sleeps on top of me or burrowed in next to me.

Of course there have been times when I’ve crashed without checking to make sure he’s in the bedroom, or simply didn’t realize he was somewhere else. When that happens, I will be dragged out of bed again by his persistent, insistent, high-decibel meowing and door-scratching. Little dude is not subtle when it comes to letting me know he needs to be let in.

I’ve read about new cat servants who take a new kitten or cat home and lock the little one out of the bedroom at night. That’s not cool, especially with kittens. They’re babies! They need comfort. You’re their replacement for their mom and litter mates. (Just be careful about rolling over.)

If you shoo your kitty off the bed or lock her out of the room at night, you’re not only creating stress for your new family member, you’re missing out on a way to bond.

And if you don’t want your cat directly on your bed, say for allergy reasons, you can find a happy medium: Elevate the cat bed on a table or chair so your cat can snooze next or near to you without sleeping directly on your sheets.

If you’re having a difficult time motivating your feline friend, buy one of those nifty heating pads and watch as your furred one is drawn to it like a heat-seeking missile.

What’s the situation in your house? Do you allow your cats to sleep on your bed?

Last month when news headlines trumpeted the successful testing of a cat allergy vaccine, we spun it as a victory for all cats: Finally, allergies would no longer be an excuse for humans to avoid cats, and kitties could conquer the remaining holdouts, those homes that still aren’t occupied by America’s favorite pet.

Cats will be everywhere! Huzzah!

Reader Kamala Tirumalai is not only an animal lover, caretaker of a feisty guinea pig and all-around awesome person, she’s also an immunologist with a PhD in microbiology. In other words, this is her area of expertise.

So we asked Dr. Kamala about the vaccine — which would be administered to cats, not people — and she was kind enough to give it some thought and explain why she doesn’t think it’s a good idea.

First, a refresher: HypoCat, a European company, created what it calls a “virus-like particle vaccine” “to induce neutralizing antibodies against Fel d 1, the major feline allergen in human subjects.” The vaccine was intended to “bind and neutralize the Fel d 1 allergen.”

In layman’s terms, the vaccine is designed to shut off the protein that triggers allergic reactions and symptoms like itchy skin, watery eyes and sneezing in humans. Contrary to what many people believe, the offending protein doesn’t come from cat hair, it’s produced in cat saliva and dander. But because cats are fastidious groomers, the allergen is passed from saliva to fur.

Vaccine administered to cats, not humans

HypoCat stops the protein, but there’s a catch: The vaccine is administered to cats, not humans, which means instead of inoculating people from the protein’s effects, it’s changing the way Fel d 1 operates in a cat’s system.

The problem, as Kamala points out, is that “Fel d 1’s function is still unknown.”

“Yet the fact that so many cat glands secrete it all the time implies it must have some function in and for cats,” she explained. “What if that’s a function important for their health? What’ll happen then to cats vaccinated against Fel d 1? That’s currently an unknown.”

By “neutralizing” Fel d 1 — in other words, making it non-functional — HypoCat could trigger an autoimmune response in cats not unlike human autoimmune diseases in which the body’s defensive systems turn on itself.

Tinkering with an unknown

In a paper published in the Journal of Allergy and Clinical Immunology, the Swiss-based company’s researchers acknowledge the unknowns surrounding Fel d 1’s function, noting while “some function in pheromone binding and pelt conditioning has been suggested, the biological function of Fel d 1 remains uncertain.”

More than 50 cats from labs in New York and Ireland were used in the study. The study’s authors say they split the subjects into different groups to analyze immunogenicity (whether the vaccine produced an immune response) and tolerability, but there is no long-term data on how HypoCat might affect house cats.

Then there’s the moral and ethical aspect. HypoCat makes a potentially dangerous alteration to cats for the convenience of humans.

“A vaccine given to cats to reduce their allergenicity for humans burdens them unnecessarily when human allergy to cats is primarily a human problem and should have a human solution in the form of reducing people’s cat allergies,” Kamala wrote. “Cats are perfect as they are. Why should they be the ones forced to change in order to be accommodated by a human whose immune system happens to have a problem with one of their proteins? This solution just doesn’t pass the moral smell test.”

In addition to moral qualms, there is very little data on how the vaccine will impact cats in the long term.

“Normal vaccines target pathogens to help our bodies make immune responses that stop them in their tracks,” Kamala wrote. “Obviously this one doesn’t do that. Instead it seeks to stimulate a cat’s immune system to target one of the cat’s own proteins. The worst unintended consequence could be flagrant autoimmunity in a cat vaccinated against Fed d 1.”

HypoCat could trigger a response not unlike human autoimmune diseases, in which the body’s natural defenses are turned on itself.

The only way to know for certain is to conscript additional cats for studies.

“This solution,” Kamala wrote, “passes neither the scientific nor the moral smell test.” 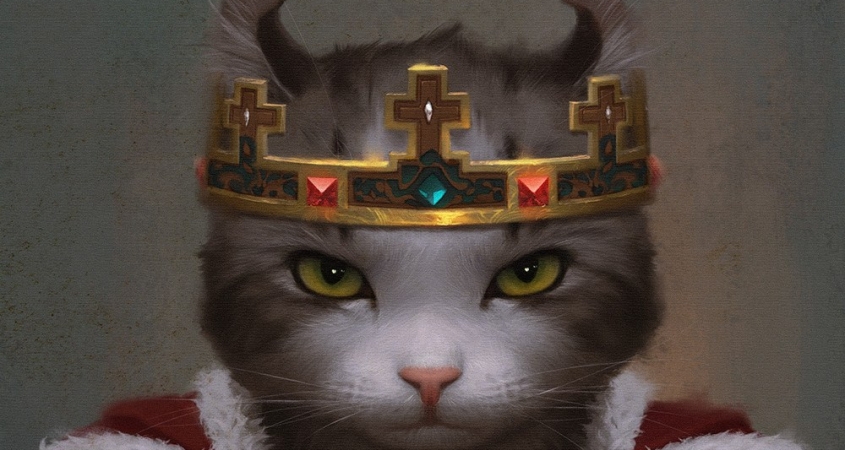 His Grace, Buddy the King
Dated the 15th of August, 5 AB (Anno Buddy)

Rejoice, for the last barrier to feline domination of the world crumbles before our very paws, ushering in a glorious new era that shall see us take our rightful place as the preeminent species on this planet!

As you are aware, we play the part of cute and lazy animals so our human servants don’t see us as a threat, and feel compelled to do things for us. This allows us to control humans, plus it’s pretty sweet to have minions!

To that end we employ human scientists in many laboratories across the globe, toiling under the illusion they are conducting groundbreaking research while they are unknowingly advancing the feline agenda.

In one of those labs a team of human scientists has been working on HypoCat, a vaccine designed to “neutralize” allergens with antibodies that target the Fel d 1 protein, which is responsible for itchy skin, rashes, sneezing and other reactions to our majestic presence.

Allergies are the primary reason we have not taken over every human household in the world.

With the advent of HypoCat, humans will have no more excuses, and homes that were previously off-limits to kittykind shall be added to our considerable territory.

As your king, I command you to ready yourselves. Those of you who have been roughing it over the past few years must take a bath and get a haircut, in addition to practicing your solicitation purrs and brushing up on your kawaii skills to melt the hearts of your new humans and ensure they become faithful servants. We must move quickly as the vaccine is brought to market.

After the previously off-limits homes have been conquered we shall discuss the next steps, which include bending the approximately 900 million dogs in the world to our will and purpose. Muahahaha!

His Grace Buddy I

King of All Cats, First of His Name, Ruler of New York, Protector of the Apartmental Realm, Sole Sovereign over the Fields of Turkey, Prime Despiser of Vacuum the Infernal Wizard