I have to admit, as cute as Buddy was as a kitten, I don’t miss the “war on sleep” phase.

A woman who adopted a kitten set up a camera to film what happens while she sleeps, like the main characters of the surprisingly scary 2007 film Paranormal Activity, except instead of doors opening and slamming shut by themselves, TVs turning on randomly and other freaky ghost stuff, she got footage of her new kitty gleefully waking her, mostly by belly-flopping on her snoozing human:

I know the experience all too well, and I’d imagine most people who have had a kitten know it too.

Buddy was absolutely ruthless as a baby! He’d scurry into a corner or hide under my desk, wait until I was snoring or just on the cusp of sleep, then climb up and screech the kitten equivalent of “Geronimo!” as he kamikaze’d himself onto my stomach.

Bud would celebrate with delighted trilling, then pad back into the shadows to wait for his next opportunity. Oftentimes I’d hear squeaky little kitten chirps and imagine him laughing as he planned his next attack. He had entirely too much fun torturing me at night.

But fear not, Jenna, it gets better! I’m happy to report the Budster is much sweeter and more considerate as an adult cat. He still wakes me up, but often not to the level of fully awake, and instead of a cat landing a triple lutz, double axle on my stomach, I’m treated to super-soft fur against my face and the calming vibration of the little dude’s purrs.

It might take the better part of a year, but your kitten will chill out, adjust to your sleep schedule and realize a peaceful snooze is more satisfying than nighty games of Harass the Human.

The feline tendency to sit on your face and screech into your ear if your cat’s hungry or really wants your attention? Unfortunately that never goes away…

As some of our readers know, I spent the first years of my professional career as a crime reporter, covering everything from murders to mall shooters, plane crashes and freak accidents.

One of the perks of the job — aside from seeing some truly crazy and bizarre things up close — was getting to work side-by-side with amazing photojournalists.

I watched how they handled themselves, what they were willing to do to get their shots and how they captured the essence of a story in just one or two frames.

It turns out photographing cats isn’t much different from capturing random moments of life. Our furry friends are unpredictable, they tend to shy away from the camera and they won’t wait for you to get the shot.

Some of this advice is general and some of it is cat-specific. I’m certainly no professional and I’m always learning, but I hope you can put some of the lessons I’ve learned to good use getting better shots of your own little buddies:

Let kitty forget about the camera

Cats are famously curious, and a shiny new thing must be investigated. As far as kitty is concerned, the best way to investigate is to pad right up to it, rub her cheeks against it, maybe bite the camera strap. You know, the standard stuff.

Let your cat do what she needs to do. If you don’t let her do her thing, the camera could become an item of intrigue, but let her sniff and bunt it a few times and she’ll quickly forget about it. A camera, after all, is clearly not as awesome as a cardboard box, a milk bottle cap or a treat.

When your cat decides to ignore your camera, you can start taking pictures. Which brings us to our next tip…

Distract the little ones with toys

Cats won’t pose for us, but that doesn’t mean we can’t nudge them toward particular actions or postures. Dangling a good wand toy or ball is a great way to get your cat to look at the camera or reach out. Want an action shot? Set a fast shutter speed and toss a ball or a bottle cap.

Catnip and treats, when used strategically, can also help you get the shot you want.

Use your smartphone for shots of opportunity

We’ve all been there: You’re sitting on your couch reading a book or watching a movie when you look over and realize your kitten looks adorable sleeping on his back, or your adult cat is striking a majestic pose…but you don’t have your camera.

The second you get up your cat is going to shift or get up to follow you, and the shot is gone.

For those fleeting opportunities keep your smartphone to hand and configure it so you can pull up the camera with a single button push: No passwords, no navigating to the app. Both iOS and Android can be configured to reach the camera quickly. (In most versions of iOS, for example, simply swipe from right to left on the lock screen to get the camera. In Android, double tap the power or home button.)

Below is one of my favorite photos of Buddy taken in a moment of opportunity with an iPhone. It may not be the kind of ultra-sharp image captured by a pro camera, but as one commenter put it, Buddy looks like he’s “radiating love.” I’d rather have a smartphone shot than no shot any day:

Unless they’re sprawled out in an ecstatic nip haze or curling up for a post-dinner nap, cats are usually moving. Unfortunately, your cat is not going to hold a pose for you while you fumble with the settings.

Whether you’re photographing a kitten with limitless energy or an adult who’s just doing his thing, you’re going to want a fast shutter speed — something in the neighborhood of 1/1,000 of a second to avoid blur and capture crisp images of motion.

If you’re not comfortable changing the settings manually, use the sports/motion preset on your camera.

Get up close, on the floor and use a proper zoom lens

Too many cat photos look like they could double as interior home photos that just happen to have a cat in them. If you’re shooting from eye height and your cat is a tiny smudge of fur in the center of the shot, you can do so much better.

Bring yourself down to your cat’s level and either shoot up close or use your zoom.

If you’re using a smartphone or a point-and-click, you’re going to want to get close because digital zoom is worthless: The camera doesn’t actually zoom, it simply displays the view at a larger size. You’re not capturing more detail. That’s why the quality decreases the more you “zoom” and the image becomes pixelated.

If you’re using a Canon, a Nikon or some other brand of dedicated camera, you have the advantage of a true optical zoom that does capture more detail. It can be useful for keeping your distance — and thus avoiding potentially distracting the cat — and for playing with perspective.

Shooting in ultra-HD JPG or RAW means you’re capturing more detail with each shot, giving you the option of heavily cropping photographs so your subject dominates the scene without degrading the image quality.

Here’s a raw photograph of Bud on my balcony with clutter in the background and uneaten treats on the ground that could be mistaken for turds or something, and the same image cropped close: 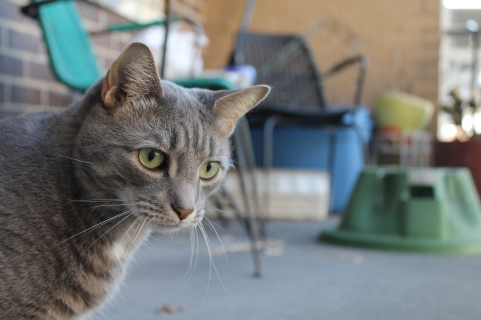 The cropped version puts the focus squarely on His Grace and cuts out most of the distracting junk. Along with a simple tweak to the color levels — giving definition to the shadows and creating better contrast — the photo is improved and its subject appear more vivid.

You may have noticed Buddy almost always has gunk in the corner of his eyes. (Just like humans, some cats produce more of it. It’s not a threat to his health.) He’s not fond of me trying to remove it. Early on I attempted to Photoshop the eye gunk out of his shots. Not only was it a lot of work, but it was very difficult to remove it without the photo looking wrong.

I decided to just let it go, thinking people would see it right away, but I’ve never even gotten a single question or comment about it. Nobody’s perfect, not even the Budster. (Shocking, I know.)

Avoid the temptation to go all Instagram-y with filters

There isn’t a camera app these days that doesn’t come loaded with Instagram-style filters to “improve” your photos. I strongly recommend resisting the urge to use them and instead take the time to learn how to filter your photos manually with Photoshop or a free alternative like the browser-based Photoshop clone, Pixlr.

The vast majority of Instagram-style filters are simply presets of the most extreme color, contrast and saturation sliders available. They degrade the image, stripping it of detail and making it look like every other photo on that platform, like autotune for images.

That’s all for now. Next time we’ll take a look at how to apply some basic filters to your photos to emphasize shadow and light, and make colors pop the way they should. Check back for part two in the weeks ahead, and thanks for reading!