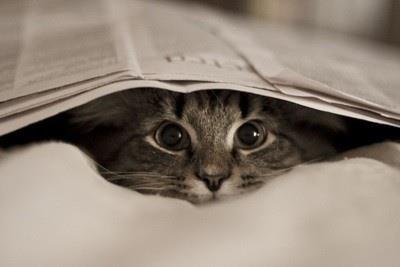 Buddy would like the public to know that vile anti-cat lies have been printed in the Charlotte Observer.

The newspaper alleges a burglar broke into a cat cafe called Gatos and Beans on Oct. 6 “and the cats did what cats do: absolutely nothing.”

The burglar smashed his way in by hurling a rock through a window while the cats “sat and watched,” the newspaper claimed.

As many as a dozen felines were inside Alabama’s first cat cafe at the time of the crime, with names like Velvet and Miss Tilly. None broke a nail during the ordeal, but were stressed out and needed a “snuggle” in the days that followed, the shop posted on Facebook.

Did absolutely nothing? Sat and watched?! Didn’t break a nail?!? Needed a snuggle?!?!?

These are outrageous lies perpetrated by a newspaper that clearly takes money from pro-dog lobby, which has a vested interest in making cats look bad.

Buddy rejects the insinuation that cats lay around and do nothing all day. A typical cat’s day is highly regimented and filled with activities such as eating, sleeping, grooming, sleeping, eating and sleeping, punctuated by energy-consuming bursts of important activity such as laser dot hunting and box-sitting.

If the burglar had broken in during a reasonable time, the kitties would have totally mauled him and held him down until the police arrived. Unfortunately, it appears the burglar was privy to the cats’ schedule and timed his break-in to coincide with Fourteenth Nap.

Buddy would like to remind everyone that cats are just as competent and badass as dogs when it comes to guarding and defending human abodes. Now if you’ll excuse him, it’s nap time.

“Study finds dogs are more than twice as smart as cats,” the clickbait headline reads:

A study led by Vanderbilt University counted for the first time the number of neurons in the cerebral cortex of the brains of cats and dogs and found that dogs have more than twice as many neurons as cats.

The research found that dogs have about 530 million cortical neurons while cats have about 250 million. These neurons are the brain cells associated with thinking, planning and complex behavior, which are all considered hallmarks of intelligence.

That’s from a story published Aug. 30 on Local12.com, the website of a Cincinatti-area news station.
So what’s wrong with the story?
This is what passes for news in 2019: Old, recycled content presented as new information, slapped together by a web producer who didn’t bother to read more than the study’s abstract.
It’s all about traffic and designing pieces of content ready-made for Facebook feeds.
But what about the central claim, that the number of neurons in an animal’s brain correlates to intelligence?
If that were true, we’d be living on a planet dominated not by humans, but by elephants: Earth’s largest terrestrial animal has some 260 billion neurons compared to an average of 100 billion for humans.
Research suggests the number of neurons in the cerebral cortex, as opposed to the entire brain, may be a better indicator of intelligence. Indeed, that’s what the study focuses on. The cerebral cortex is associated with higher cognitive functions. As you’d expect, humans have unusually high neuron counts in that region of the brain.
But by that measurement, humans aren’t at the top either.
If neuron density in the cerebral cortex was the primary indicator of intelligence, the long-finned pilot whale would reign supreme, and other types of whales and dolphins would rival humans.
Not only do pilot whales have twice as many cortical neurons as humans, their brains have much more surface area, which scientists once believed corresponded to intelligence.
So if we’re keeping score, intelligence is not determined by:
At one time or another, each of those things was thought of as the way to measure smarts. So if none of those things are true markers of intelligence, what is?
That’s the million-dollar question. We don’t have an answer, which is why scientists conduct this kind of research in the first place.
Contrary to what the article claims, cortical neuron count does not provide “solid scientific evidence that dogs really are smarter than cats.”
But that doesn’t make for a clickable, shareable headline, does it?
In truth, we can’t even define what “more intelligent” really means because each species sees the world differently, and has different priorities to enable it to survive and thrive.
When we measure intelligence, we measure it on a human scale, according to how we humans see the world. That’s hardly an impartial way of evaluating the intelligence of animals with much different needs and ways of seeing the world, and it doesn’t yield many useful insights.
Keeping that in mind is particularly important when it comes to studying cats, who have their own agendas and priorities. Dogs are eager to please and obedient. Cats only listen when it suits them.
That doesn’t mean one is smarter than the other, it simply means they’re different

So says Bill Burr in an extended confessional rant about dogs picking up on their humans’ moods.

“But if you’re a psycho like me, and you’re standing in front of the TV screaming at the ref like ‘Dude, you’ve gotta be f—-ing kidding me!’, I didn’t realize the dog was gonna be in the corner like, ‘Yeah, you gotta be f—-in’ kidding me! This is bullsh!t! I don’t know what this guy’s mad at, but I love this guy!’”

Thirty thousand years of human companionship have forged dogs into the animal world’s foremost people experts, more well-attuned to human moods and behavior than any other creature by several orders of magnitude. Dogs can smell our emotions, read intent in our body language and gauge our sincerity by the way our facial muscles twitch.

If a dog’s favorite person is amped up about something, the dog is too.

But cats? They just don’t care.

When humans act out, cats are more like annoyed roommates.

“Excuse me, but you’re at a nine and I need you at about a two, okay? Some of us are trying to sleep like civilized people.”

“What?! Can’t you see I’m upset? You should be concerned.”

“Not my problem. Remember what I said: A two. And dinner better not be late! I don’t care what those guys on the TV are doing, my bowl needs to have fresh yums at the strike of dinner o’clock.”

If it doesn’t impact their food, territory or the quality of the service they’re receiving, cats don’t want to know.

So while I might be on the edge of my seat watching the Yankees’ Aaron Judge take a 3-2 pitch with the game tied in the bottom of the ninth inning, Buddy’s probably thinking, “Damnit, can the Yankees lose already so he stops moving around? I need a stable lap and some peace and quiet!”

Any cat’s an ambivalent cat, regardless of whether you’re a psycho. 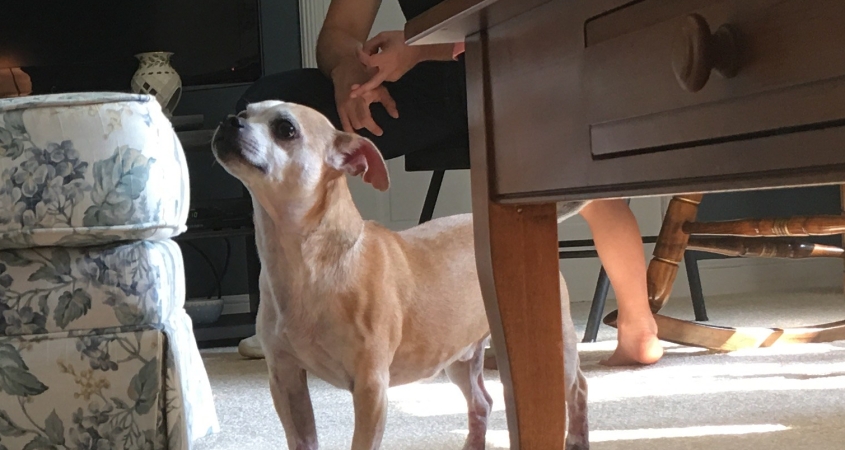 This is my cousin, Cosmo.

As you can see, he’s a dog. Specifically some sort of chihuahua-terrier bastard mix. I try not to hold it against him, but he’s not so smart.

Here’s an interesting fact: Did you know dogs think they’re territorial like us cats? In their very small brains they think “I’ve got my own territory to defend! I know! I’ll be very loud and tell any potential intruders I’m standing right here just waiting for an ass kicking! Bark bark!”

Intruders in kitty territory don’t even know they’re being watched. They think the coast is clear and they drop their guard, oblivious to the ninja cat already sailing through the air, razor claws extended, ready to dispense a little feline-style justice!

Cosmo is visiting New York with his dad, Brother of Big Buddy. BoBB is a pretty cool guy. He understands who runs things around here and he pays tribute to me by rubbing my head.

Cosmo himself is easy to bully. All I have to do is flash my terrifying fangs and show off my huge muscles, and he whimpers and runs away. Then I eat all the snacks.

Still, Cosmo’s not bad. For a dog. 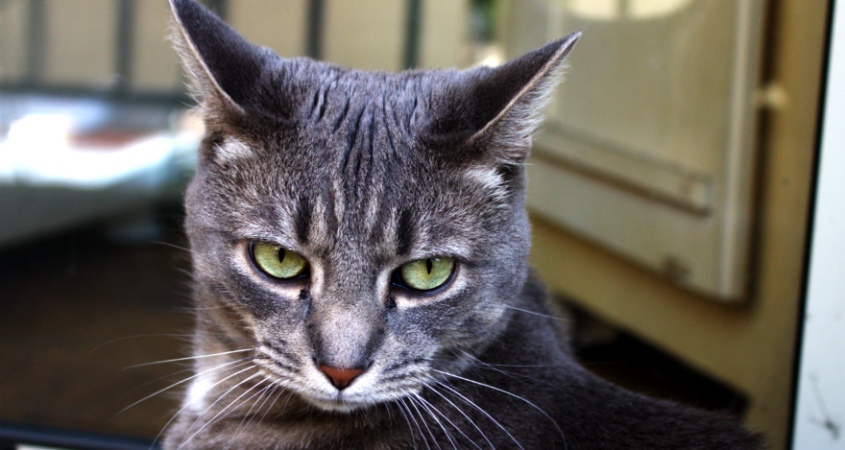 When I heard a brave cat fought off a coyote, I thought to myself “That’s gotta be Buddy!” Sure enough, there you were on social media, describing the haymakers you landed on that foul canid: In the video we can see you execute a vicious right hook, followed by a dazzling spin move, then a series of rapid-fire jabs to the coyote’s face.

We can’t see what happens when you chase the coyote behind the car, but I’m going to go ahead and assume it was all sorts of badassery.

Oh, it was nothing really. Just another day. I eat coyotes for breakfast, you know.

You lying sack of shit! That video is from Altadena, California, and you live in New York! Also, the tabby in the video has white paws and a white behind. You’re all gray. Stop lying!

Nuh-uh. It was me. You can tell by the huge muscles and the acrobatic moves. 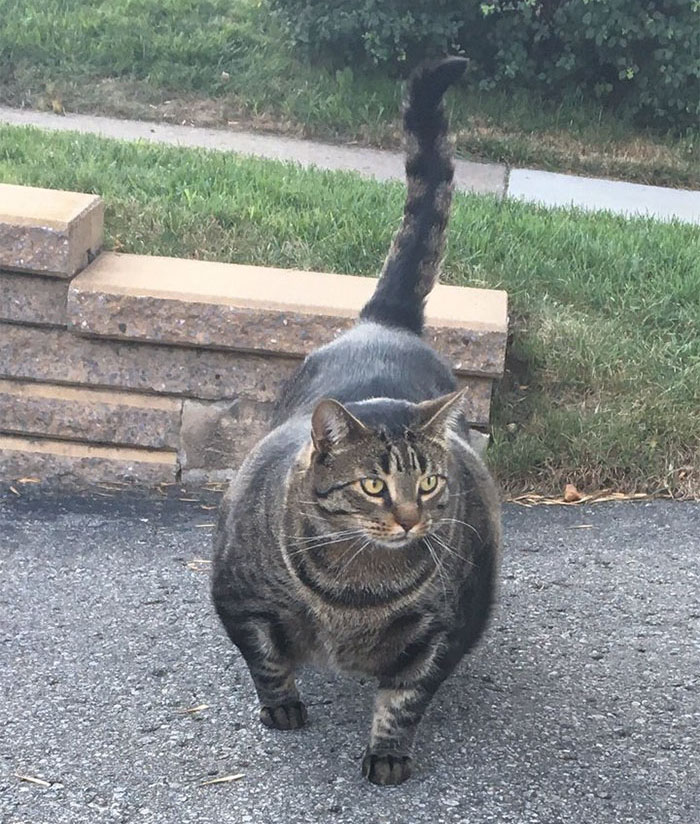 Stop lying, dude. We all know you run screaming at the sight of a vacuum and freak out when you hear a garbage truck. If you saw a coyote up close you’d crap yourself.

Nuh-uh. I bravely stand up to vacuums all the time. Look at how ripped I am!

Come meet me tonight at midnight near the railroad tracks and we’ll see once and for all whether you’re as tough as you say. I’ll even tie one paw behind my back. All I need is one to smack you back to your Big Buddy. My cousin Boris has an iPhone, he’ll record the whole thing.

Put up or shut up.

My schedule is full tonight, tomorrow, the rest of the week and for the next several months. I have napping and eating to do. Also I can’t just appear on any video, you know. There are all sorts of rights issues that need to be worked out. It’s out of my hands. Ask my lawyers. But I’m totally not scared and would fight you if I could.