Big Buddy: Okay, so we’re taking a break from horror and science fiction for a little while and going with something more Buddy-friendly.

Big Buddy: Yes, but we chose this one so you don’t spend the movie hiding in your litterbox. Anyway the movie opens with the young Mowgli and a pack of young wolves running through the jungle. They’re being chased by a black panther.

Buddy: Wow! That guy is really cool! Look at him.

Big Buddy: Looks like the panther is catching up to Mowgli and the wolves. 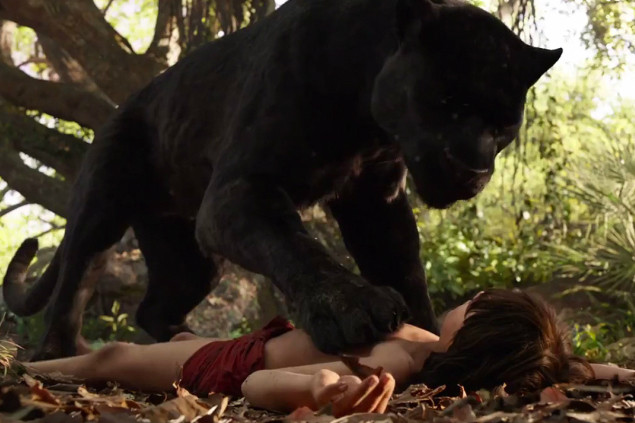 Buddy: You calm down, he’s…oh! Mowgli fell off a branch! The panther is on him…Mmmm I wonder what human tastes like.

Big Buddy: This topic is getting uncomfortable. Thank God you’re only 10 pounds. So it turns out the panther is a more civilized cat than Buddy and we learn he’s not gonna eat Mowgli. The panther is Bagheera, Mowgli’s friend and kind of like a surrogate dad to the “man cub.”

Buddy: Cool! I didn’t know jungle cats have human servants too. Mowgli must have to shovel for hours to clean Bagheera’s litter box.

Big Buddy: Uh, sure. Something like that. Mowgli, Bagheera and the little wolves head off together toward home, where they join the wolf pack and Raksha, who is Mowgli’s adopted mother.

Buddy: This is not realistic. Why is the panther not eating the dogs?

Big Buddy: Because this is a Disney movie. And those are wolves, little dude. Did I not feed you today or something? Damn. Now the wolves have the cubs recite the law of the jungle, and we’ve got a voice-over montage by Bagheera.

Buddy: Wow, a lot of days pass without rain. Bagheera says it’s “the driest season that anyone could remember.” The jungle looks all shriveled up. What is this place?

Big Buddy: That’s the Peace Rock. It’s where all the animals of the jungle come during the drought to drink from the pool and sate their thirst.

Buddy: It looks like a lunch buffet. Rhinos and wildabeasts and birds and delicious-looking animals with antlers. They all back away when they see Bagheera because they know what’s up. Cats rule.

Big Buddy: But according to the laws of the jungle, there is no fighting or killing or eating each other at Peace Rock.

Buddy: Well that stinks. Why would anyone agree to that?

Big Buddy: Because it’s Peace Rock! And the law of the jungle says during droughts, when the water is so low that you can see the rock, all animals can come and drink without fear of being eaten.

Buddy: He’s majestic! Wow, look at how the other animals back up like 100 feet. That’s respect!

Big Buddy: That’s Shere Khan, the most feared animal in the jungle.

Big Buddy: Have I ever told you what sarcasm is?

Buddy: Like those coffins the ancient Egyptians used, all decorated and stuff.

Buddy: Wow! Listen to that roar! The other animals give Shere Khan as much space as he needs. Peace Rock becomes his own personal watering hole.

Big Buddy: Shere Khan is not happy with the wolves.

Big Buddy: Now Bagheera is getting between Shere Khan and the wolves. Shere Khan says he smells a “man cub.” This is about Mowgli.

Buddy: Ah! Okay, so humans are in short supply in the jungle, and Shere Khan isn’t happy that Bagheera has his own human, but Shere Khan does not. He wants Mowgli to brush him, bring him food and scoop his box.

Buddy: Like anyone wants to hear your interpretation, Mr. “Jon Snow and Daenerys Rule Happily Ever After on Game of Thrones.”

Big Buddy: Touché. Hold the fort down for a minute, will you? I’ve gotta take care of numbah one.

Big Buddy: Are those…crushed Cheez Doodles all over my floor? What in the world possessed you to roll all over them as if they’re catnip?

Buddy: Because I wanted to be orange, like Shere Khan! Now I look exactly like him! ROOOOOAAAAARRRRR!

Big Buddy: Give me that broom.

Buddy: Get it yourself, Shere Khan does no one’s bidding!