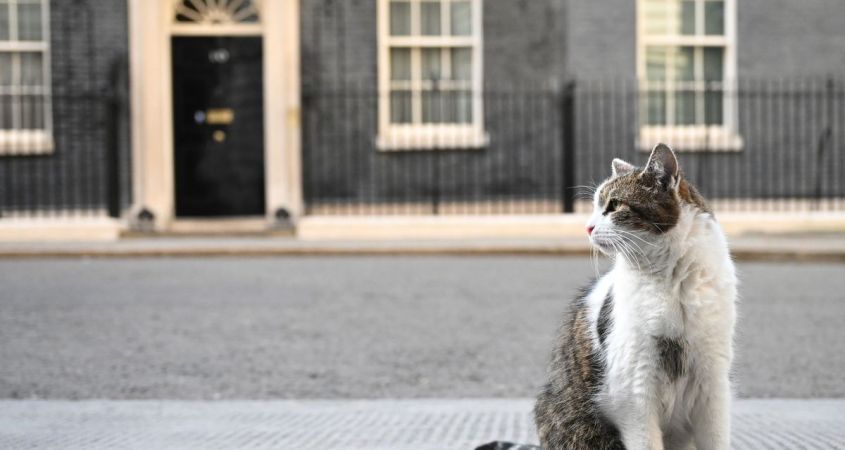 Larry the Cat, official mouser in chief at 10 Downing Street, is now on his fifth prime minister.

After the disastrous and short-lived tenure of his predecessor, Lizz Truss, new PM Rishi Sunak officially moved into the UK prime minister’s residence earlier this week — and walked right past Larry without acknowledging him:

How did Larry know Rishi Sunak was coming?! @Number10cat pic.twitter.com/VokQHChYDi

Note the reporter doing a live broadcast, which you can hear in the background.

“He is arriving now…the new prime minister of the United Kingdom!” the reporter said as Larry padded his way down the sidewalk and stopped.

Failing to acknowledge the true power at No. 10 is an ill portend for Sunak and the UK. What kind of person doesn’t greet his boss on his first official day of work? Larry will get him sorted in short time, undoubtedly.

During the opening phase of the Ukraine war, there was an Indian national webcasting from Donbas, constantly asking for money to keep his “pet jaguars” — actually leopards — safe from the advancing Russians.

It was one of the most infuriating aspects of the young war. The guy was keeping the big cats in an apartment, referred to them as his “children” despite not even knowing their species or how to care for them, and he lied to his audience, claiming he’d purchased them from the Kyiv Zoo. He didn’t. Zoos don’t sell big cats to people. He got them on the illegal wildlife market.

That’s good news. Hopefully any remaining wild animals are taken out of the hands of private owners and put in sanctuaries where they belong. Big cats don’t belong in a war zone, and they don’t belong in private hands.

Meanwhile, Homeward Trails Animal Rescue in Washington, D.C., has house cats from Ukraine up for adoption.

Most of the little ones were rescued from warn-torn areas in the eastern part of the country, and the rest were moved from a Ukrainian shelter just in time, as the building was hit by Russian missiles shortly after the animals were cleared out. Some of the cats were found wandering amid the ruins and destruction in towns and villages that had been hit hard by the invading Russians, Homeward Trails’ Sue Bell told WTOP.

The US non-profit will continue to work with a shelter in Ukraine, which rescues cats from heavily impacted areas.

“Right now, Homeward Trails is the only organization taking cats from this new Ukraine shelter,” Bell said. “And so, for every cat that we took from the shelter, that not only gave that cat an opportunity for a home, but it created a space in that shelter for the team to go out there and bring more cats in.” 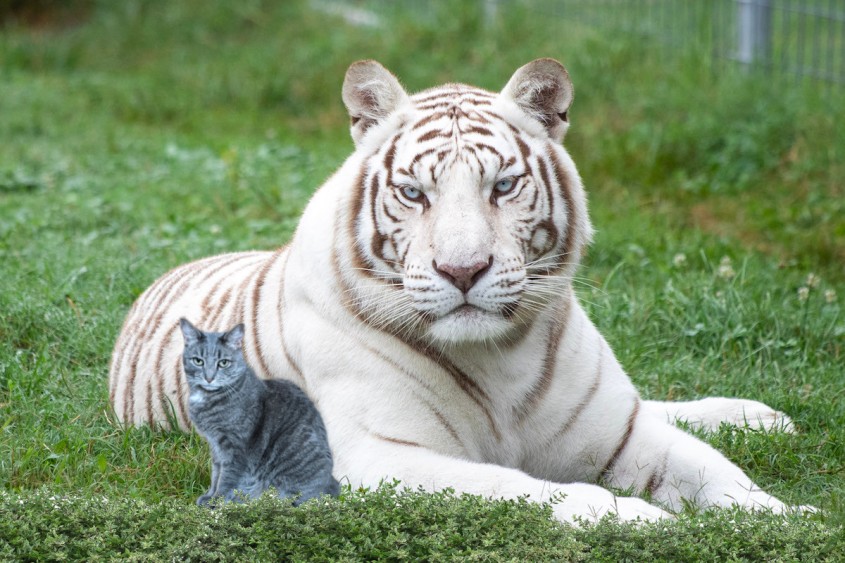 There are so many cat days, I lose track, so apologies for missing this one.

Happy National Cat Day to all PITB readers and your beautiful kitties! It’s a good excuse to spoil our little buddies and remind them how much we appreciate them.

You may have noticed, if you don’t have ad blockers installed on your browser, that I enabled ads in mid-September. I strongly dislike ads and I don’t like clutter on the site, but after three years of operating and publishing PITB, I decided to enable a limited number of ads in an effort to get PITB to pay for itself and hopefully a few upgrades that would be helpful in making the site more accessible, while also providing the tools to expand PITB’s content offerings.

Please send us your feedback. If you see an ad that covers the content, let me know. If you see an inappropriate ad, let me know. You should see ads for cat-related products and/or ads for things you may have expressed interest in before — due to the way ad networks use cookies and data from services you use, which is perfectly normal — but I want to make sure no one’s having a bad experience here.

No. 10 Downing Street in London is supposed to be the official residence and office of the UK’s prime minister, but we think it should be called Larry’s House.

Larry, the official mouser in chief since 2011, has now outlasted four prime ministers: David Cameron, Theresa May, Boris Johnson, and the short-tenured Liz Truss, who lasted just 44 days. (And became the butt of jokes when The Daily Star set up a live webcast of a head of iceberg lettuce, betting that Truss’s time as PM would be over by the time the lettuce wilted. The lettuce won.)

“The King has asked me to become Prime Minister because this nonsense has gone on long enough.” pic.twitter.com/eFL3fgSfVL

If you’ve ever wondered why your cat likes to lay in the famous loaf position, Jackson Galaxy has weighed in on the matter. (There’s a British theme here too. For some reason Galaxy, real name Richard Kirschner, uses a British accent to explain loafing behavior, and it’s…not good.)

“The first thing that we want to look at is the position itself; we’ve got paws tucked under the whole body resting basically on arms,” Galaxy says in a video. “This look right here is decidedly cat. Because what this is saying is I’m not going anywhere.”

Cats loaf to conserve body heat while remaining in a position that allows them to quickly get up if need be. Galaxy cautions, however, that a “half loaf” position could indicate your cat isn’t feeling too hot, health-wise.

If a cat is half-loafing, he says, that could mean she’s not getting completely comfortable because she feels vulnerable, and for evolutionary reasons (cats are both predator and prey) cats in pain feel particularly vulnerable. Most predators go for the easy kill, which is why cats go to great lengths to disguise pain and discomfort, as opposed to us humans, who whine and complain and make sure everyone knows how lousy we feel.

Larry the Cat has been the official chief mouser at the UK’s prime minister’s home since 2011.

Now he should be bestowed with a new title — chief foxer.

The famous tabby was guarding No. 10 Downing Street on a recent evening when a fox approached the property. Larry slow-walked the canid intruder back to an adjacent garden, but wasn’t satisfied when the fox lingered, so he laid the smacketh down to show foxy who was boss.

The thick-headed vulpine interloper tried a third time to get closer to the house, but Larry wasn’t having it.

The encounter was a reminder that Larry can handle business when sufficiently motivated.

Larry is a former stray rescued by London’s Battersea Dogs and Cats and was four years old when he got the job on the strength of the shelter’s claim that he was an excellent hunter who would solve No. 10’s rodent problem. Bringing in a capable kitty became a priority in 2011 when the rats on site became so bold, they’d walk right past reporters and TV cameras outside the prime minister’s official residence and office.

The long-tenured mouser got a bad rep in his early days, when critics complained he “does little besides sleep” and spend time with his “lady friend,” Maisie, while also depositing hair on Prime Minister David Cameron’s suits.

But it’s Larry who’s had the last laugh as his tenure has outlast those of three prime ministers — Cameron, Theresa May and Boris Johnson. He’s now on his fourth PM, Liz Truss.

According to his official profile on the UK government’s website, “Larry spends his days greeting guests to the house, inspecting security defences and testing antique furniture for napping quality. His day-to-day responsibilities also include contemplating a solution to the mouse occupancy of the house. Larry says this is still ‘in tactical planning stage.'”