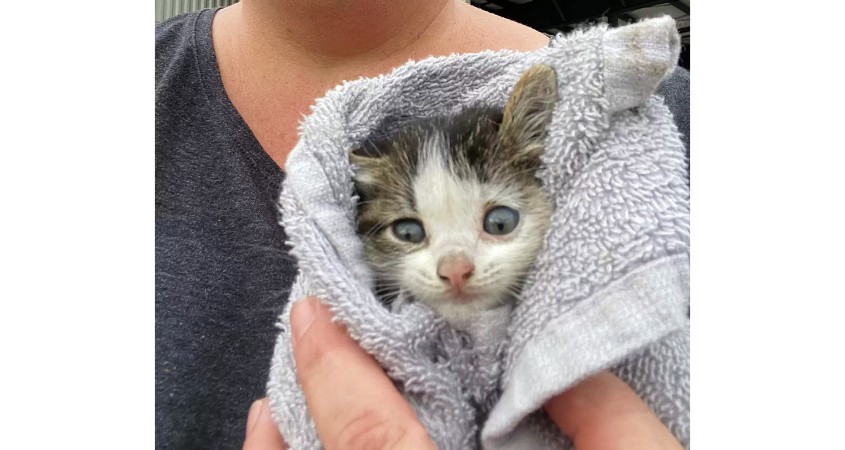 When volunteers in Elkhart, Indiana, went to trap a mom and her kittens near an industrial site, one of the babies panicked and ran straight into a hole, taking a tumble into a drainage pipe beneath.

The rescuers from a non-profit TNR group called Catsnip didn’t give up on the four-week-old baby even after finding her proved to be much more difficult than they imagined. They called off the search in Elkhart — about 160 miles north of Indianapolis — the first night when it was too dark to keep working. They dropped food for the scared fluffball, whom they could hear but still could not locate in the dark, tight subterranean space.

The next morning they were back at it, trying to literally flush the kitten out before a volunteer named Ashley descended via a manhole 75 feet from the spot where the kitten had fallen in.

The entire saga took about 48 hours and hinged on Ashley who, because of her small size, was able to squeeze into a pipe and crawl 30 feet to the terrified baby cat — then had to crawl out backwards the way she came while cradling the little one.

It was worth it for the volunteers, who named the kitten Piper in honor of her adventure, gave her fluids and formula from a dropper, then reunited her with her mom. Read about the whole encounter at The Dodo. (And serious props to Ashley! Just thinking about what she had to do makes me shudder. Cats may love tight spaces, but most humans do not.)

As gamers who generally prefer more depth, the Buddies never got on the Fortnite bandwagon, so we weren’t aware that Fortnite has a character named Meowscles until encountering this article from Cracked.

As you can see, Meowscles was clearly inspired by Bud, who is known for his incredibly ripped physique and totally isn’t a bit chubby. (“That’s all muscle, not fat!” Buddy insists.)

Fortnite is a battle royale-style game in which up to 100 players compete against each other in live matches. The game is free-to-play, with developer Epic Games making its money by selling cosmetic items as microtransactions. Meowscles is one of about 1,400 different “outfits” players can purchase to customize their characters.

The game has been a monumental success for Epic, earning billions and leading the company to launch the Epic Games Store, the first serious competitor to Steam, which has been the dominant platform for PC gamers for years. Epic has been so flush with cash that’s it’s been giving away free games every week to lure customers away from Steam, even upping the freebies to a new game every day during the holidays.

In Massachusetts, the Cat Fancier’s Association held its ninth annual cat and owner costume contest on Sunday. Unfortunately, the only story we can find about the event comes from the local public radio affiliate, so there’s not much in terms of photos.

If you were going to enter such a contest with your cat, what costumes would you and your fluffy overlord wear?

I’m thinking maybe I’d be a Targaryen with Bud as a baby dragon perched on my shoulder in honor of Game of Thrones/House of the Dragon. But that might offend little dude, who tends to think of himself as a hulking tiger. Perhaps the easier and more realistic “costume” would be Bud dressed as a king, snug in his own little carrier designed to look like a royal palanquin, with me carrying the palanquin as his dutiful servant. Thus, art imitates life. 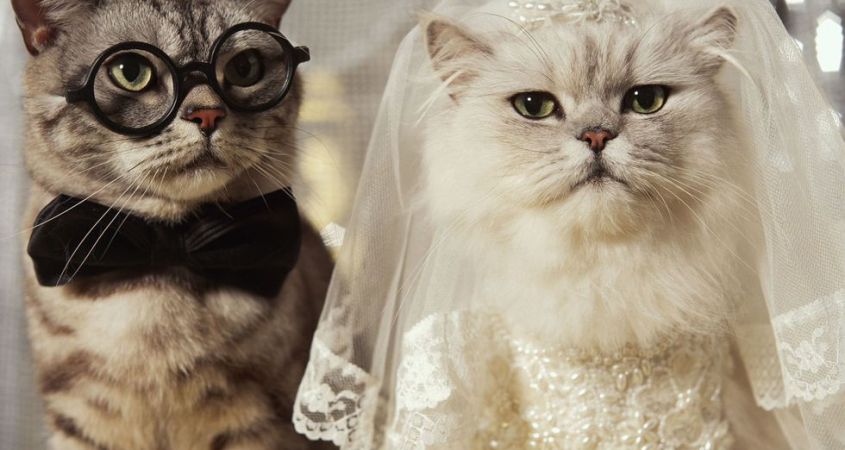 A cat has been hailed as a better father than many humans after his people uploaded a video of the proud father holding paws with his “baby mama” while she nurses their kittens.

Momma cat went into labor and the chivalrous tomcat “was with her the whole way,” user Anaya wrote in the caption. The short video pans over the top of a cardboard box where the happy couple lounge protectively around their babies.

A follow-up video shows the ginger tom with his kittens while mom takes a break to eat and rehydrate.

I showed the videos to Bud to get his reaction.

“That’s very sweet, assuming of course you’re the type of male cat who wants to settle down and raise a family,” he said. “But some of us are so popular with the ladies that it would be a crime to remove ourselves from the field, so to speak. Did you know my tour bus was once overturned by thousands of screaming school girls in Japan? Yeah. I mean, no big deal.”

It’s been confirmed Buddy does not know he’s neutered. When his human tried to carefully broach the subject, the silver tabby declared it “fake news” before checking his toy basket to confirm that he does indeed still possess all of his balls.

“You can’t fool me,” Buddy said afterward. “When it’s time to settle down and I find the right kitty, we’ll make lots of beautiful kittens and grant awesome names to my issue, at which time I’ll name a successor. You know I’m an earl in the UK, don’t you? Yeah. Queen Elizabeth herself created my peerage. No big deal.”

Happy Mother’s Day to all moms, human and feline! 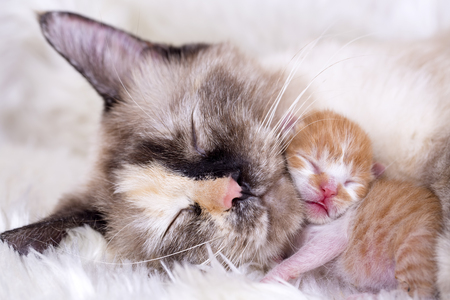 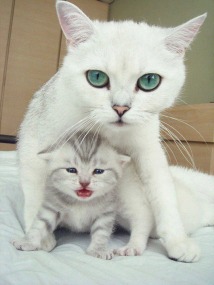 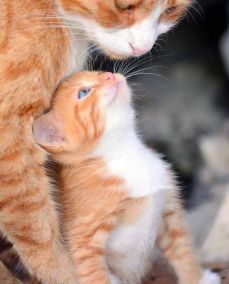 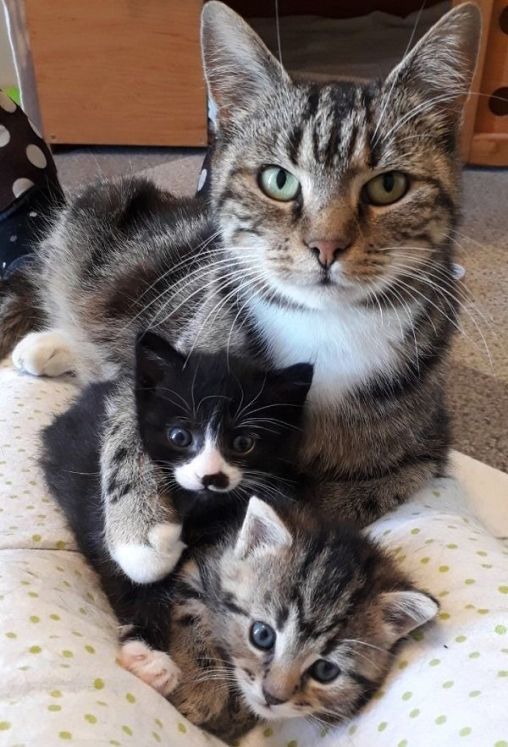 Even those of us who love cats often joke about how aloof they are, and then they go and do something that shows such a profound understanding of human behavior that we’re left thunderstruck.

That was the case in Turkey’s Izmir province, where a ginger tabby dragged her two babies into a health clinic this week one at a time, according to a report in the English-language Turkish news site Daily Sabah:

The official said that they noticed the animal while they were attending to patients as she started “constantly meowing.” When they saw something was wrong with kittens, they took a closer look and discovered the kittens’ eyes were closed tightly. “We gave them some drugs and they started opening their eyes and later, we transferred them to the veterinary department. It was the first time that an animal walked into our clinic, and it was a very emotional moment for us,” the official said.

Both kittens had eye infections and fully recovered.

On April 27, 2020, a female cat walked into the emergency room of Kucukcekmece Hospital in Istanbul while carrying her kitten in her mouth, then deposited the “mischievous” little one right in front of a group of hospital employees who were chatting.

Hospital staff gave the mom food and water while they examined her baby.

And in May of 2020, a cat in Mexico shocked a woman with his understanding of how the human world works. After she saw him in front of a store and bent down to pet him, he led her into the store, guided her to the pet food aisle and pointed to the exact type of food he wanted.

Not only did this cat understand that he had to be accompanied by a human to get into the store, and precisely where to direct her, but he also knew the packaging of his favorite food and understood that she had to buy it for him. He may not understand the concept of currency, but he does know a human has to get him the food and he can’t just tear into it.

The woman was so moved that she adopted the smart little guy and named him Rabbit.

These examples not only show how astonishingly intelligent and observant cats are — or can be, when they’re motivated — they also make it difficult for anyone to cling to old beliefs that cats and other mammals are unthinking, unfeeling automatons. Or the dreaded, all too common “it’s just a cat.”

If cats understand hospitals and health clinics are places where the sick and injured are treated, and they understand abstract social concepts like “a human must obtain this for me,” it makes you wonder what else they observe and fully understand in those furry little heads. 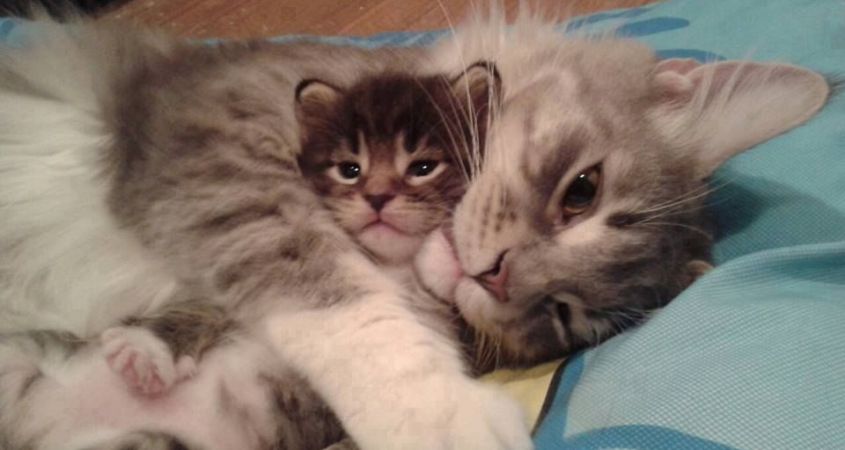 One of the most compelling cat stories I’ve ever heard involved a reader of this blog, a woman who took in a white stray she named Snowy.

Snowy was a street cat who was always with a male cat, and the woman fed them both whenever they came by. Soon it became clear Snowy was pregnant, and her trusting tom — the father of her babies — nuzzled her goodbye as Snowy accepted the woman’s invitation to move inside at least temporarily so she’d have a safe place to give birth to her kittens.

In the three weeks that followed, Snowy raised her kittens in the woman’s home, and the tomcat would come by daily to see her and their little ones.

Snowy died when a pair of dogs climbed the porch steps, snapping at her kittens. Snowy fought the dogs off while her babies escaped, but she died from her injuries.

The poor tom who had been her constant companion came by the next night and meowed for her. He showed up again and again, meowing mournfully each night, distraught at her disappearance.

The story shows cats are capable of extraordinary empathy and love: The love between Snowy and her mate, who was protective of Snowy and loving with their babies, an unusual trait in toms. The love Snowy had for her babies, sacrificing her life for theirs. And the love the crestfallen woman had for those kittens when she returned home and found Snowy dead and the kittens hiding.

Another story of a mother who gave her life for her kittens reinforces the idea that cats are capable of great love and empathy.

When a mobile home in Pasco County, Florida, caught fire this week, the man who lived there was able to escape but his cats were trapped and firefighters couldn’t reach them.

The mother cat covered her kittens with her body, laying on top of them and remaining there even as the fire scorched her.

When firefighters poked through the debris, they found the cat and her kittens. The mom and one of her babies died at the veterinary hospital, but one kitten survived.

“It seemed as if mom did everything possible to protect her kittens, even risking her own life in their defense, but the flames and the smoke were too much,” said Rick Chaboudy, executive director of the Suncoast Animal League. “But mom managed to protect one of her kittens from the blaze, enough to give that kitty a chance at life. Other than her whiskers being burned completely off and a slight odor of smoke, she is doing well with her bottle feeding and her cuddling.”

Staff at the shelter named the kitten Molly after Molly Williams, a former slave who became the first black female firefighter in the US. Molly the kitten is expected to make a full recovery.

What’s that? A tear, you say? Absurd! Buddy and I do not cry. Now if you’ll excuse us, we’re going to toss a football around, talk about trucks and fix some things around the house with power tools.