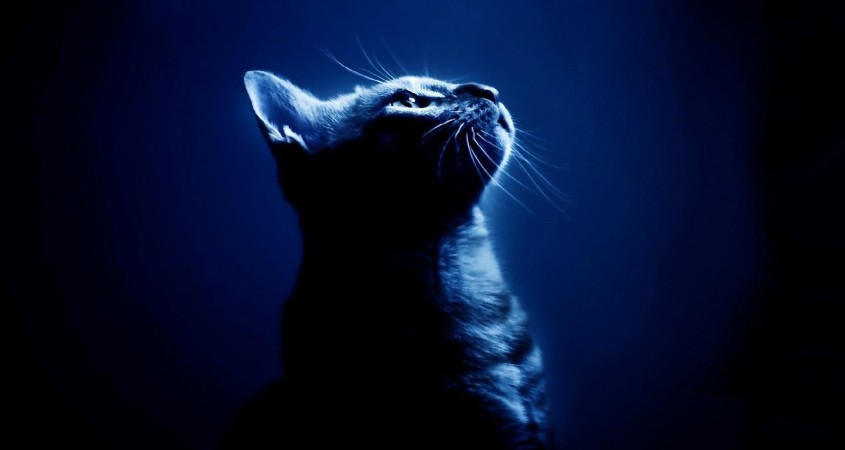 NEW YORK — A thousand people are engaged in lively chatter inside the 42nd St. Illusionist Theatre when a tiny figure appears at the periphery of the stage and a hush falls over the crowd.

The lights dim and a drum roll echoes up from the orchestra pit.

“It’s him! It’s him!” a woman seated near the front answers, waving her handkerchief. “The Great Buddini!”

The crowd erupts into rapturous applause and the orchestra plays an excitingly mysterious tune as the Great Buddini pads across the stage, illuminated by a green spotlight.

“Thank you! Thank you!” the tuxedoed feline says, doffing his top hat. He touches a paw to his heart. “You’re too kind! Thank you!”

A whimsical melody drifts up from the pit and the Great Buddini produces a bag of Blue Buffalo Bursts from a pocket in his tuxedo. He presents it to the crowd, turns it over and tears it open theatrically.

“For my first trick, I’m going to make these Bursts disappear,” Buddini says, tossing the treats into the air and gobbling them all in quick succession.

The crowd loves it. Women clap, men stomp their feet and enthusiasts near the back whistle in appreciation.

“For my next trick,” Buddini says, “I’m going to make this entire turkey disappear!”

Two calicoes in bedazzled gowns emerge from behind the curtain, pushing a cart with a large turkey on top of it. They turn the cart 360 degrees, lift the black table cloth so the audience can see there are no hidden compartments, and stop just before the Great Buddini launches himself at the turkey and consumes it like an insane Pac Man, wolfing the entire bird down in less than eight seconds.

A drum roll begins anew, the Great Buddini turns, bows with a flourish and issues a massive belch that reverberates around the hall. Once again the theater shakes with the roaring approval of the crowd.

“He’s a genius!” a woman yells out later as Buddini, balanced on stilts, makes pieces of cheese vanish into his mouth. “He’s mad! He’s mad!”

The Great Buddini’s show, in which the famed magician makes 17 different kinds of food disappear, has been sold out for more than three weeks running since he arrived in New York.

A review in the New York Times called Buddini “an unrivaled master of sleight of paw” and noted kittens from as far away as Delaware were arriving in New York, hoping to apprentice for the master feline. The New York Evening News was equally flattering, writing that the Great Buddini “blurs the line between ho-hum magic and astonishing feats that border on the supernatural.”

Among the few negative reviews was a scathing piece in the New York Post, which chided enthusiasts for “falling for” Buddini’s “obviously mundane tricks.”

“He’s not ‘making the food disappear,’ he’s just eating it!” the Post’s critic seethed. “Am I going crazy? I can’t be the only one to notice this. People are paying to watch a chubby cat pig out on snacks on a stage. What has the world come to?”

10 thoughts on “Critics Rave: The Great Buddini Is ‘An Unrivaled Master of Sleight of Paw’”