You know your dreams are small when you’re wildly excited about toilet paper.

I braved a trip outdoors today to head to a local pharmacy where there was one pathetic shelf stocked with maybe two dozen rolls of TP, some paper towels and tissues, limit two per customer.

I thanked the people at the pharmacy — a mom and pop shop — profusely for limiting purchases to put off the hoarders, and for staying open. We lionize cops and emergency services personnel, and everyone’s been extremely grateful for our healthcare professionals. They deserve the praise.

But we tend to forget about the people who work at grocery stores and pharmacies, those essential pillars of life that keep this country running and keep social order from collapsing. Cashiers, stock boys and pharmacy techs don’t make a lot of money — certainly not compared to doctors and nurses — and they don’t get pensions like cops and firefighters.

Yet they show up to work, despite the danger. We should all be thankful for them, and let them know we appreciate them. Even a simple thanks or enquiring about their safety lets them know we’re thinking of them and we’re grateful for what they do.

Okay. No one comes here to read about my bathroom habits, and I vowed not to let the virus stuff temper the humor on this blog. You guys come here for cat humor and to read about His Grace, Buddy the Magnificent, not for the same depressing crap you can read on news sites.

In the past I’ve written about Buddy the Real Cat vs Buddy the Cartoonish Internet Cat, but after I wrote the post this week about Buddy the Kitten attacking me in my sleep, I thought it’s probably worth mentioning that even the most outrageously ridiculous Buddy stories on this blog have a kernel of truth to them, and in some cases are very close to the truth.

So while Buddy might not build trebuchets to launch water balloons at me while I’m sleeping, he does have an entire repertoire of incredibly annoying methods to rouse me from sleep. 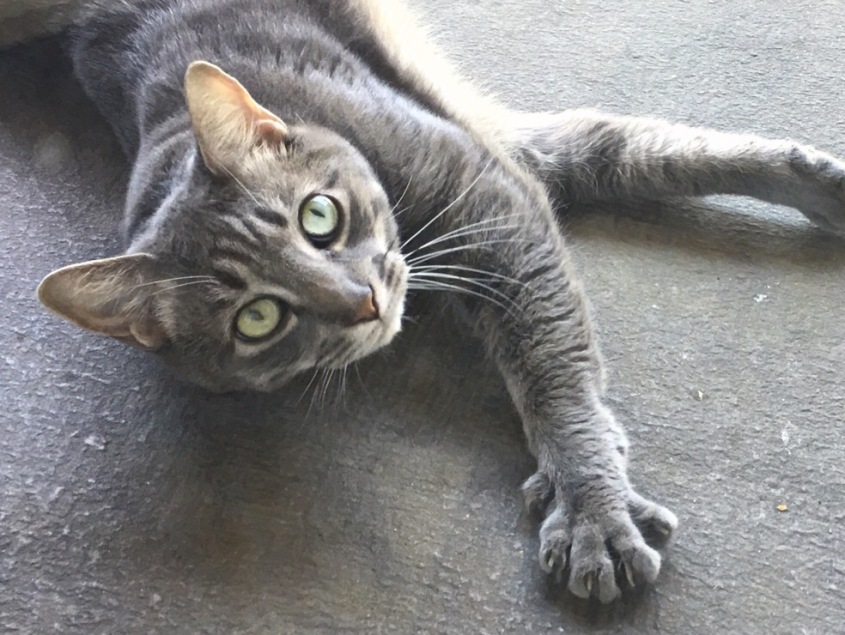 It’s not because he’s hungry. I put down a bowl of Blue Buffalo kibble and fresh water before going to bed so His Grace doesn’t have to wake me when he’s got the munchies.

His go-to method is simply yowling loudly and incessantly, but I’ve countered that with earplugs. Haha!

The nuclear option, when all else fails, is walking on my head and screaming in my ear.

That, of course, is when I hurl all sorts of vile invective at him. People who read this blog know I love my cat, I care deeply for his safety and happiness, and I often put his needs before my own. But if someone who knows nothing about me heard the stuff that comes out of my mouth when Buddy’s trying to wake me up, they’d think I’m a terrible person.

Let’s just say it typically involves threats of defenestration, selling him to the local Chinese restaurant, punting him like a field goal kicker, and calling him a furry little shitball.

He may not be able to understand my words, but he definitely understands my tone, and still it doesn’t phase him. He knows me too well, including the fact that when I finally drag my ass out of bed and sit down with a cup of coffee, I’ll rub his head and call him a good boy as he purrs.

8 thoughts on “Hallelujah! I Can Wipe My Ass Again!”