Buddy and I were a bit skeptical when we first heard the story of a cat who padded into the emergency room of a hospital, carrying her kitten by the scruff of the neck, to plead for help for the little one.

The story first appeared on Reddit without any details, but we were able to track down some of the people involved to fill out the narrative and answer some questions.

A woman was waiting in the emergency room of Kucukcekmece Hospital in Istanbul at about 5 p.m. on April 27 when the cat dragged her baby through the open doors. 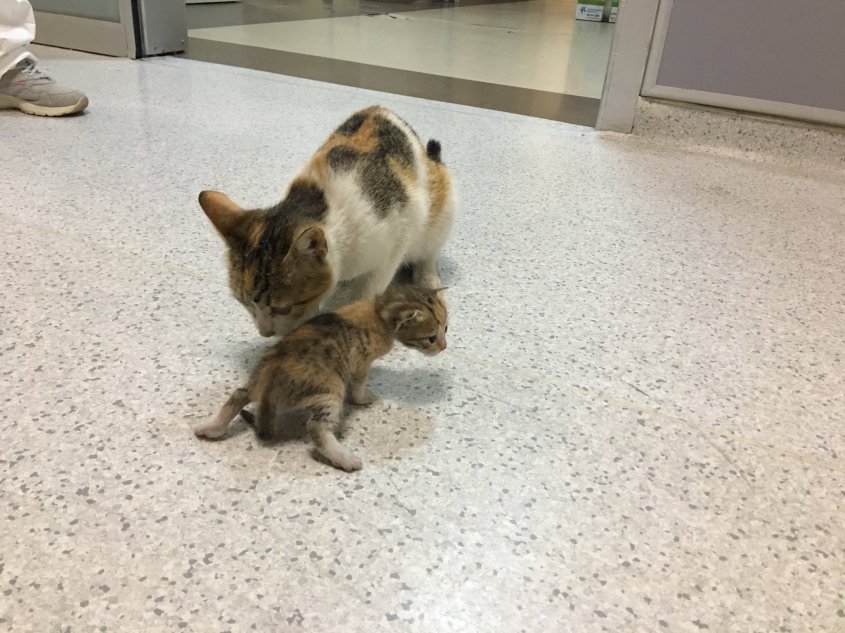 The witness, Merve Özcan, described the kitten as “a little bit mischievous” in Twitter posts about the incident.

An article in Sözcü, a daily newspaper whose name translates to “spokesperson,” said the mother cat brought her kitten right up to the blue-gowned hospital staff, meowing for attention.

Hospital staff immediately helped — more about that below — and the cat mom followed them, keeping her eyes on her baby as they brought the kitten into a room for treatment.

“While the kitten was being cared for, the mother cat was given milk and food,” the newspaper reported. “Hospital staff ensured full treatment by passing them onto a veterinarian after their intervention.”

The story doesn’t say exactly what was wrong with the kitten, and Özcan did not know either.

While this story would seem insane to most of us, it starts to make a lot more sense when you consider where it happened: Istanbul, a city famous for its massive cat population, and the humans who revere those felines.

From the Legal Nomads travel blog:

Cats are the most beloved animal in Istanbul and the living attraction of this huge city. They are extremely friendly, come in all sorts of cuddly colors and sizes, and always respond with a greedy “meow.” Stray cats usually take the best seats at cafes and restaurants in Istanbul without anyone even bothering moving them. They maneuver around tables and customers, inside and out of the buildings in search of the most comfortable spot.

Caring for the city’s hundreds of thousands of cats is a community effort: People feed them, pet them, bring them to veterinarians when they’re injured, and even build little dwellings for them.

With that in mind, it makes sense that a cat in Istanbul would know to approach humans for help, and to go to a hospital. If the mom cat lives in the area, undoubtedly she’s seen the sick and injured walk through those doors many times.

“Money is not an issue to some people when it comes to cats,” Ozan, a pet shop employee, told Reuters. “They take in cats with broken legs, blind ones or ones with stomach problems and bring them to the clinic. When they see that they are healed, they let them live on the street again.”

In an article titled “Istanbul: The City of Cats,” Goran Tomasevic of Reuters describes the relationship between the city’s inhabitants and their feline friends:

They are so ubiquitous that no one bats an eye at a cat padding across the lobby of a high-rise office building, or when one curls up to sleep on a nearby barstool. Shop owners and locals often know their neighbourhood cats by name and will tell tales about them, as if chatting about a friend.

A 2017 documentary, Kedi (Turkish for cat), explores the world of Istanbul’s street cats and the people who love them. Pictured at the top of this post is Kedi director Ceyda Torun, posing with cats in Istanbul.

You can watch a trailer for the documentary here: