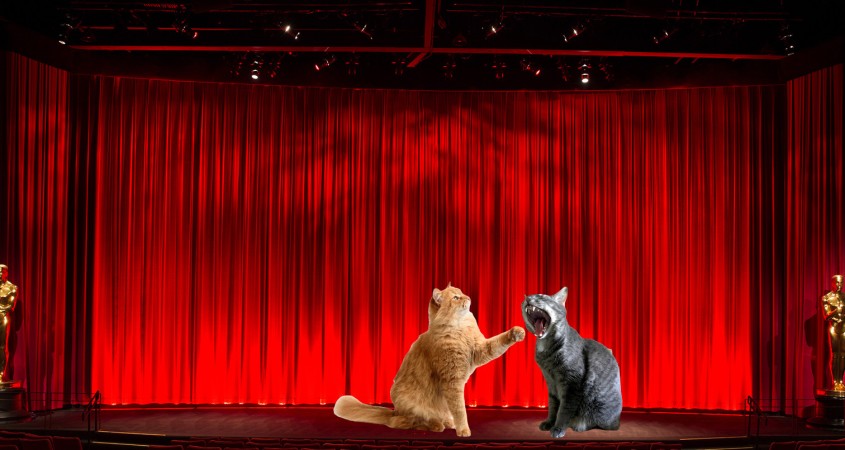 Buddy the Cat was cruising through Sunday night’s Acatemy Awards ceremony and razzing the celebrity cats in attendance when things took a turn for the bizarre and violent.

After joking that Alejandro Baldwinito the Spanish cat would have to lose Best Actor after his wife, Ellaria, lost Best Actress, comedian Buddy turned to Garfield and his better half, Venus the two-faced kitty.

“Venus, I love you! Two-Face in the next Batman movie, can’t wait to see it!” Buddy said, drawing laughs from the crowd — including from Garfield, who appeared to find the joke hilarious.

But when Garfield noticed Venus staring daggers at him, he cleared his throat and stood up.

Buddy was stopped mid-sentence as Garfield paw-slapped him hard across the face, drawing shocked gasps from the stars in attendance.

“Keep Venus’ name out your —-ing mouth!” Garfield yelled, settling back into his seat.

“Keep my wife’s name out your —ing mouth!” Garfield repeated, casting a glance at Venus as Lupita Purrongo looked on behind them, open-mouthed and horrified.

“I’m going to, okay?” Buddy said, momentarily at a loss for words.

“That was, uh, the greatest night in the history of television!” Buddy said, recovering and cutting some of the tension in the room.

Just minutes later, Garfield accepted the Oscar for Best Actor and had a meltdown on stage.

“I do it for love!” the rotund orange tabby said. “I have to protect the people around me, and Richard, King Richard, he once said, you know… Who has lasagna? Does anyone have lasagna?”