‘Ambushing Is Fun and Awesome!’ by Buddy the Cat, guest columnist

Ambushing is not only a super fun activity, it’s a great way for cat and human to bond! When I come screaming out of the shadows at 2 a.m. to startle you during your sleep-fogged walk to the bathroom, it’s an expression of love.

And if you think about it, I’m actually doing you a favor by startling you and making you more alert. You never know when a burglar or a chalupacabra might be in the house, so I’m really providing a valuable service!

Do we ambush people we don’t love? Of course not. Only you get the privilege of being woken up at 5 a.m. by a cat belly flopping onto your chest, ripping you out of your comfortable dreams. I wouldn’t dream of launching myself at someone else’s head while they’re watching TV or tripping a stranger by appearing out of nowhere and weaving between their legs.

It’s an expression of affection! Think of it like a slow eye blink or the equivalent of purring and nuzzling your cheek. 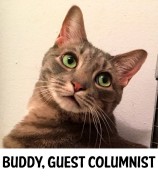 There I was sleeping peacefully on the couch, getting my 12th hour of beauty rest in when you plopped down next to me and scared the hell out of me.

That’s an ambush! That’s not cool!

For all their talk of being the ‘smart’ species, humans are remarkably inconsiderate of others and really think nothing of startling us poor cats.

Like the times you get up suddenly when you know we’re sleeping in your lap. We startle easily. Doing that to us is cruel! Besides, if you’ve managed to hold it in for two hours while we nap, what’s a third hour between friends?

Dropping items on the table without announcing your intentions first, yelling “Boo!”, making sudden noises or sudden movements, moving furniture: That sort of behavior is rude and uncalled for. Is it too much to ask that you announce your intentions beforehand, then move slowly and deliberately?

Just consult with us before you do anything at all. That’s all we’re asking.

Point-Counterpoint presents two essays taking opposing positions on a topic. Join us next week, when Buddy the Cat will debate Buddy the Cat on another important topic.

2 thoughts on “Point/Counterpoint: ‘Ambushing Is Fun And Awesome!’ vs ‘Don’t Ambush, It’s Not Cool!’”