Amazon’s newest big-budget prestige drama, The Peripheral, imagines a near future when technology has become even more deeply embedded in every day life.

The story is set a decade from now in 2032, and while Flynne’s brother, Burton (Jack Reynor), plays startlingly realistic VR games for fun, Flynne plays them for money. Although Burton is a former United States Marine Corps infantryman and war veteran, his sister is the superior player when it comes to video games, and she’s so good that well-heeled players across the world pay her to carry them through high-difficulty levels.

If that seems fanciful, consider that it already happens in real life: some people fork over big bucks to highly skilled players who can help them win in multiplayer video games like Fortnite, or run them through the most challenging missions in online role playing games to get coveted in-game gear.

Flynne’s side hustle allows her to afford expensive medication for her sickly mother. Apparently in 2032, Democrats and Republicans are still squabbling over how to pass meaningful prescription drug reforms while remaining in the good graces of the corporate behemoths who finance their campaigns. Some things never change.

When a Colombian company called Milagros Coldiron offers Flynne a hefty chunk of change to beta test their newest game — and the incredibly immersive new headset it comes with — Flynne thinks she’s just taking a lucrative but routine job, one that will help pay for her mom’s meds for at least a few weeks.

What she doesn’t know is that her life is going to change drastically the moment she steps into the newest form of virtual reality, revealing things about her world and herself that she never imagined.

There’s so much more to the story, and in fact we’ve barely scratched the surface, but The Peripheral is the kind of show best appreciated by knowing as little as possible going in.

The ambitious new series is based on a 2014 novel by technoprophet William Gibson of Neuromancer fame. Gibson envisioned the concept of cyberspace in 1981, more than a decade before the first mass market commercial dial-up services were available.

At the time, the idea of exploring almost photorealistic worlds in virtual reality was a radical new idea, and it took more than 35 years for technology to catch up by making it feasible. (We’re still not quite there yet. VR tech has improved by leaps and bounds, and we’re beginning to see the first deeply immersive VR games, but Mark Zuckerberg’s much-hyped version of the metaverse, for example, has fallen flat and been pilloried by press and players alike.)

By choosing to adapt Gibson’s work, Amazon has dipped into the largely untouched world of literary science fiction.

While the science fiction of movies and TV has been treading the same worn ground and returning to the same tired concepts for decades, SF novels are a rich source of astonishingly inventive big ideas, from the existential stories of Liu Cixin (The Three Body Problem) to the galaxy-spanning space opera of the late, great Iain M. Banks, to the gothic horror-tinged, wildly imaginative universe of Revelation Space by Welsh astrophysicist Alastair Reynolds.

Finally we’ve moved beyond the Alien clones, Star Wars sequels, prequels, spinoffs and crossovers, as well as the unfulfilling JJ Abrams mystery box offerings that have made up the bulk of live action science fiction on the big and small screens.

There are no candy-colored light swords in The Peripheral, nor are there spandex-clad superheroes or franchise installments designed with merchandise sales in mind. Instead, we get a story for adults, one that gives the audience a lot to think about while also holding a mirror up to our own world, as the best science fiction always does.

After all, technology changes but people don’t. Human nature is a constant. What we do with our shiny new toys says a lot about us as a species and civilization. 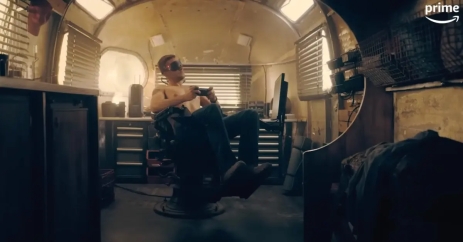 Reynor’s Burton connects to a VR world from his Airstream camper in The Peripheral, which is set primarily in North Carolina’s Blue Ridge Mountains and London, UK.

Gary Carr as Wilf Netherton and Chloe Grace Moretz as Flynne Fisher in The Peripheral.

Although The Peripheral begins with the comparatively low-stakes world of virtual reality, its scope rapidly expands until, by the end of the first episode, it becomes clear the show is asking its audience to grapple with existential questions about humanity and our future.

The Peripheral demands its audience’s full attention as it introduces concepts like the parallel universes of M-theory, nanotechnology and the idea that even if matter can’t be shifted between time and space, information in the form of photons can.

Gibson uses these heady concepts in his narrative sandbox, forcing his characters to consider wild concepts like the possibility that there may be infinite versions of themselves existing in infinite branching realities.

How would you react knowing there’s a version of yourself who chose to study classical literature and move to Athens, or a version who became a software programmer, authored a lucrative app and lives in a Manhattan penthouse? Can you imagine having a different wife or husband, or a different child? (Are there realities in which I am not the loyal and loving servant of Buddy? In that case, who is feeding him snacks, and are they doing it promptly?)

Of course, none of this stuff would matter without interesting characters and a compelling narrative. Moretz and Reynor have the chemistry of a real brother and sister in the way they regularly bicker but ultimately love each other. Eli Goree’s Connor is a man of wonderful paradoxes, and T’Nia Miller steals every scene she’s in as the delightfully malicious Cherise Nuland, an antagonist who loves making her enemies squirm while dispensing witticisms in cut glass RP.

For longtime SF fans, there’s another compelling reason to give the series a shot: Canadian writer-director Vincenzo Natali, best known for his mind-bending 1997 indie film Cube, is an executive producer and directs four of the season’s episodes. Natali is a pro at incorporating heady ideas in ways that enhance his narratives instead of weighing them down.

The first season just concluded, and you can stream all eight episodes on Amazon Prime. Bud and I are already looking forward to The Peripheral’s return.

10 thoughts on “PITB Reviews: ‘The Peripheral’ Is A Refreshingly Original Science Fiction Thriller”