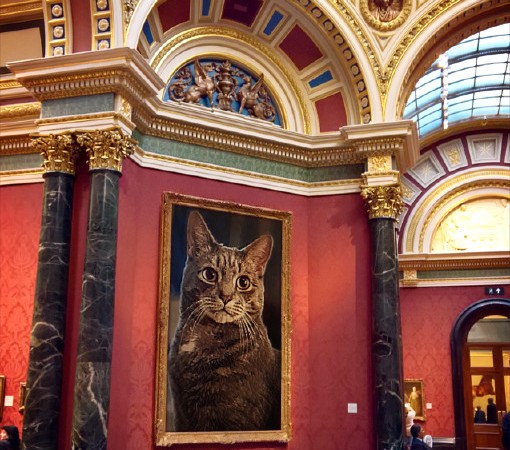 PARIS — A collection of priceless and beloved works depicting Buddy the Cat will go on display in April, the Louvre announced Sunday.

“Gazing upon his enchanting visage, we can see why so many artistes fantastique choose Messieur Buddy as their muse, yes?” Etienne Lecomte said. “He has a je ne sais quoi that eludes lesser felines and men alike. This is why we choose Le grande Buddeaux.”

Several mysterious women were seen fanning themselves as they gathered around portraits of Buddy, part of a small group of Parisian society elites and European aristocrats who were given a preview of the gallery.

“Il est magnifique!” one of the women proclaimed immediately before fainting.

Rounding out the collection is the Buddesian Tryptich by the celebrated British street artist Banksy.

“I wanted to capture the cold terror of that moment when you’re walking through the jungle without a care in the world when suddenly you find yourself face to face with a tiger, an apex predator,” Banksy said. “Then you think, ‘No, wait a minute! I know this tiger! He’s cuddly and wonderful.'”

13 thoughts on “Louvre To Display ‘The Buddy Collection’”