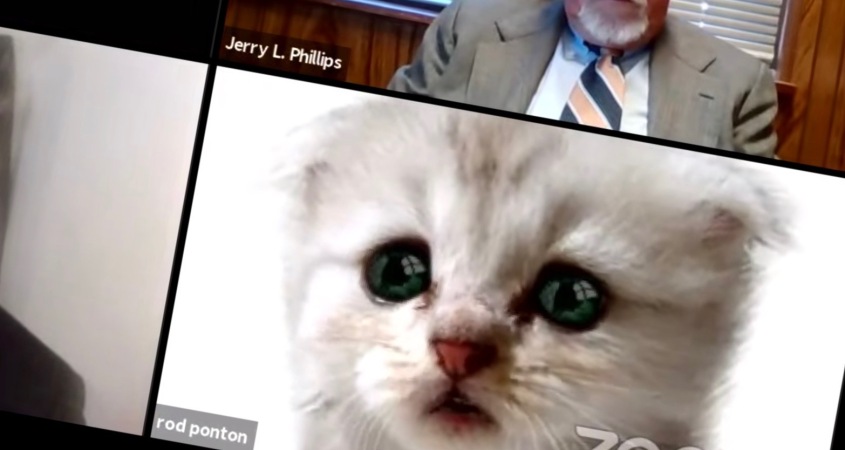 Your Honor, I make a meowtion to dismiss!

Americans have denied pretty much everything in courts of law over the years, but this one may be a first. After a Texas lawyer connected to a Zoom virtual civil forfeiture hearing and couldn’t figure out how to remove a filter that turned his on-screen image into that of an anthropomorphic kitten, the lawyer stated the obvious.

“I’m here live,” the attorney told the presiding judge. “I’m not a cat.”

The lawyer is Rod Ponton of Presidio, Texas, and he’s become a viral sensation.

“When I got on Zoom everything seemed fine – my picture popped up, I was in the waiting room with the judge. But when the judge called the case, I disappeared and a cat appeared instead of me to my great surprise of course,” Ponton told the BBC.

Ponton’s misadventure is relatable at a time when almost everything that doesn’t require physical presence has been moved online due to the Coronavirus, and it’s perhaps most relatable to adults who can’t figure out what their kids have done to their computers.

Ponton, it turns out, was using his secretary’s computer after her kid had been using it. Thus the kitten filter.

He told the BBC he’s trying to “roll with it” as the video racks up millions of views.

“In Texas we have a phrase that you can’t put toothpaste back in the tube,” Ponton said. “If this was going to become an internet sensation I just had to laugh at myself along with everybody else doing so.”

6 thoughts on “Lawyer Attends Virtual Court Hearing As A Kitten, Thanks To Cam Filter”