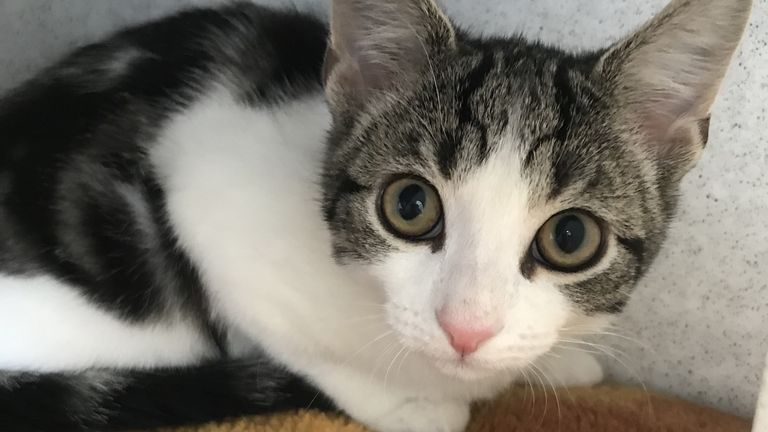 We all know what it’s like — you’re trying to get something done when your pet, beloved as he or she is, has decided to be really annoying in insisting on treats.

Finn the cat was in this position recently when his pet, Piper the Cavalier King Charles Spaniel, had her eye — or more likely her nose — on a small bowl of Cinnamon Toast Crunch on the kitchen counter. Piper couldn’t reach the tasty snack, so Finn climbed up, fished out a piece of cereal one at a time and dropped them for his loyal canine companion. (Finn himself had no interest in the sugary cereal, lacking in meat as it is.)

This should settle any remaining questions about where cats and dogs stand relative to each other:

Homeless kitten from UK has rare condition, is neither male nor female

A kitten rescued by a shelter in Warrington, about 20 miles west of Manchester, was originally listed as female and given the name hope. However, during a routine exam, a veterinarian found Hope does not have reproductive organs, according to The Guardian.

“There’s an outside possibility of some ectopic ovarian tissue hiding away internally but we think this is extremely unlikely … This is so rare that there isn’t really a commonly used term for this condition, but it is effectively sexual organ agenesis,” said Fiona Brockbank, senior veterinarian at Cats Protection in Warrington. “While this means we don’t have any previous cases [on which] to base our knowledge of how this will affect Hope in the future, we spent time monitoring this cat to ensure they can urinate and defecate appropriately before they were considered ready for rehoming.”

Hope’s condition is so rare it doesn’t have a name, but shelter manager Beni Benstead told the newspaper that shouldn’t dissuade potential adopters. Hope is very friendly with other cats at the shelter and “has been a delight to care for.”