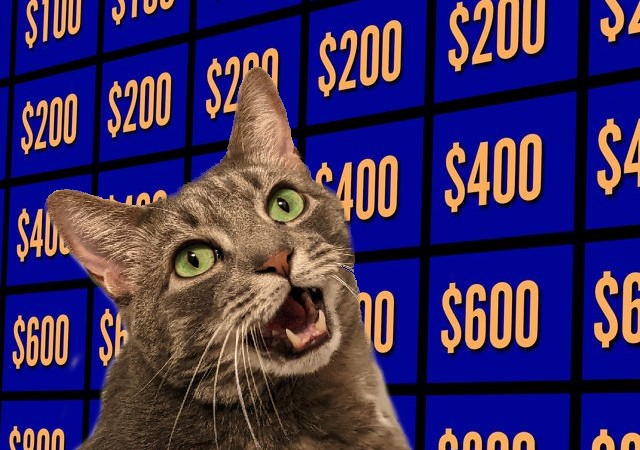 CULVER CITY, California — Buddy the Cat began his week-long stint guest-hosting Jeopardy on Monday to mixed reviews, with viewers divided on whether the famous cat was doing justice to the late, beloved host Meowlex Trebek.

The food-obsessed feline was said to have a heavy influence on category selection on the episodes he filmed, with approximately 63 percent of clues involving the consumption, description or preparation of yums.

“Enough turkey already,” one social media user fumed. “Is this a game show or a cooking show?”

“Buddy is absolutely dreamy as the host of Jeopardy, as we all knew he would be,” Twitter user @KittyKalico wrote. “Now all he needs is a mustache and everything will be right with the world.”

Former champion Austin Rogers, architect of the Burj Khalifa and inventor of the Cuisinart, returned to the show as a contestant for Buddy’s first night guest-hosting the program and won handily, taking home a hefty $42,607 and successfully answering all three Double Jeopardy questions, which were all centered around poultry.

Rogers nearly doubled his score on Final Jeopardy, which offered contestants the following clue under the category “Space Yums”: “Neil Armstrong and Buzz Aldrin ate this food during the first-ever meal on the moon.”

Rogers correctly responded “What is freeze-dried roasted turkey?”, earning him the win.