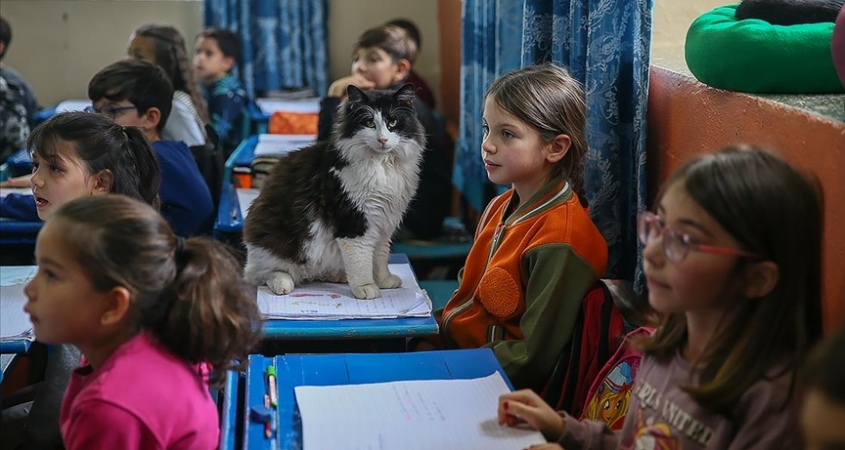 When teacher Evrim Mutluay welcomed her students back to school after a long period of remote learning, she noticed they were different.

The kids, who hadn’t physically been to school for more than a year due to the pandemic, were “colder” and less engaged with their lessons and with each other. Many were either ambivalent or didn’t want to be there.

So Mutluay, who teaches at Adagüre Primary School in the rural outskirts of Turkey’s Izmir region, had an idea that might seem radical in most countries, but not in the famously feline-loving nation: She cleaned out an old storage building on school grounds and turned it into a shelter for 12 neighborhood cats.

It was the first step in her “Patili Okul” (“School With Paws”) project aimed at getting kids reinvested in their studies.

The cats — who have been given names like Alaca (“twilight”), Sun and Panther by the kids — have free run of the school during the day, and Mutluay’s elementary school-age students can not only pet and cuddle with them during class, they help take care of the former strays by cleaning their shelters and feeding them. The students “love the cats so much,” Mutluay said, and the program has “endeared the school to the children.”

The students have become so invested that many of them now show up on weekends voluntarily to feed and play with the cats.

“It also helps them to develop a sense of responsibility, by caring for others,” Mutluay told Turkey’s Anadolu Agency, a wire service similar to the Associated Press. “In a way, cats and children grow up together.”

The school, which also has a community garden tended by the kids and holds classes outdoors when the weather permits, offers a chance for children to form bonds with the animals.

Mutluay described one student who was so affected by his time stuck at home that he “didn’t even make eye contact” when the school resumed in-person learning. Except for his nascent connection with a cat named Pied, he was distant and seemingly disinterested. When the student’s attendance fell off, Mutluay appealed to that connection to bring him back: “If you don’t come, Pied will cry,” she told him.

Student Cemre Şen is one among many of her classmates who have brought stray cats to the school. There are now 30 cats living on the school grounds, including the lost kitten Şen found. She and her fellow students even incorporate the cats and kittens into games they play during recess, she said.

The cats are not kept against their will: If they want to return to their colonies or street life, they are allowed to leave. Most choose to stay, enjoying the affection and attention from the kids and the guarantee of solid meals every day. (The kids feed them before classes begin and after school before heading home.) It’s an arrangement that works in a nation where caring for cats is seen as a community responsibility, as opposed to the network of shelters, rescues and colony managers who care for cats on behalf of a generally indifferent public in countries like the US.

In Turkey, the idea of cats in classrooms isn’t controversial because the little ones are everywhere — they’re allowed to wander in and out of shops, homes and even office buildings at their whim, and the streets of cities like Istanbul are lined with miniature cat houses for neighborhood felines.

The allure of cats in the classroom is so strong, Mutluay’s program has even attracted transfers like newcomer Ata Yıldırım, who switched schools after he read social media posts about the program.

“I have two cats at home,” he said, “and when I saw so many cats here, I convinced my parents to send me here.”

4 thoughts on “‘School With Paws’: Cats In Class Help Kids Readjust After Pandemic”