Queen frontman Freddie Mercury loved his cats so much that when he found himself missing them on tour, he’d ask his girlfriend to put them on the phone.

“He’d get to a hotel, we’d dial through, and he really would talk to his cats,” Peter Freestone, Mercury’s personal assistant of 12 years, wrote in his memoir.

Mercury’s feline infatuation began years earlier when Mary Austin, his girlfriend and eventual fiance, adopted a pair of kittens named Tom and Jerry when she and Mercury moved in together. Austin would stay home to take care of the duo — and a subsequently growing pride — when Freddie did gigs.

“Mary would hold Tom and Jerry in turn up to the receiver to listen to Freddie talking,” Freestone wrote. “This continued throughout the years with succeeding feline occupants of his houses.” 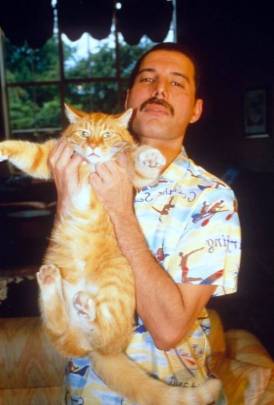 Mercury was a servant to 10 cats throughout his life, and loved them so much he dedicated an album to them, devoted a song to his cat Delilah, and took great joy in picking out presents for them at Christmas.

Thus, Bohemian Catsody seems both inevitable and so natural, it’s a wonder someone hasn’t done it before. New Zealander Shirley Șerban uploaded the video on Oct. 1 and it’s already got 89,000-plus views.

The lyrics couldn’t be more appropriate:

“I choose to employ you, now attend to me
Open the door, then I’ll come, then I’ll go
Feed me now, don’t be slow!
Stalk you in the bathroom
Privacy don’t matter to me…to me!
Mama, just killed a mouse
Ate it all except the head
That’s your present on the bed
Mama, a sign of my love
Why did you scream and throw it all away?
Mama, ooooh, oooh!
Didn’t mean to make you cry
I’ll try to find a bird for you tomorrow!”