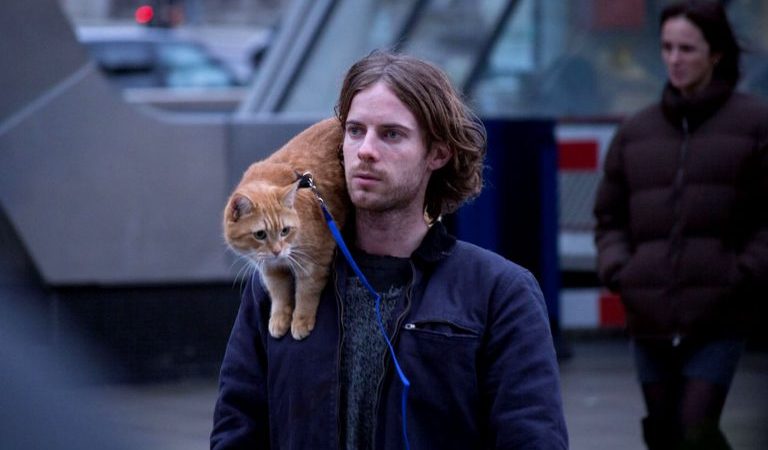 Back in 1 AB (that’s After Bud, for those of you who don’t use the Buddesian Calendar) my mom got me a copy of A Streetcat Named Bob, which told the story of a recovering heroin addict and the cat who literally walked into his life.

James Bowen was in a rehab program and was living for the first time in his own apartment when the injured but insistent orange tabby showed up at his door. Though dirt poor, Bowen scraped together enough money from busking — playing his guitar in public for tips — to bring Bob to the veterinarian and buy the basics he’d need to care for the cat.

After adjusting to life inside the apartment with James, Bob decided one day he’d accompany his human to work, which for James meant standing outside major metro hubs and hawking a magazine called The Big Issue. For our readers who aren’t familiar with the magazine, The Big Issue exclusively employs the homeless and the struggling as magazine vendors, offering them an opportunity for employment when they might not otherwise be able to secure it.

Bob turned out to be an unflappable cat, calmly riding on James’ shoulders as they took the bus to James’ assigned vendor location. Whether perched on James shoulder or standing next to him, Bob became a fixture by James’ side, handling the crowds and the interested passersby with a calm not usually associated with cats.

Soon word spread of the magazine salesman with “The Big Issue cat.” A local newspaper ran a story about James and Bob, then a few Youtubers visited the duo on the street, uploading videos of man and cat selling magazines and busking for extra money.

One of James and Bob’s biggest breaks came when Sir Paul McCartney heard their story and visited them in person as they were hawking magazines in London.

From there, as the Legend of Bob grew, a shrewd literary agent saw potential in the story of the recovering addict and the cat, and inked Bowen to a book deal. The rest is history: The book propelled James and his feline friend to stardom, leading to a handful of additional books, a cartoon and a 2016 movie about the duo.

“He taught me that I had to buckle up…because he was following me around and stuff like that, I had to take responsibility for him,” Bowen recalled in a 2016 interview. “I didn’t know it then, but the love that he was giving me was helping me to change my ways.”

For many people, the story of James and Bob represented not only the unconditional love between cat and human, but also hope and the promise of second chances in life.

Bud is no Bob — he’d run screaming at a book signing with hundreds lined up to greet him — and I’m no James, but my mom thought I’d enjoy the book because I was also going through a tough time when I adopted Buddy — though nothing as dramatic as James’ situation — and like James I found a measure of peace in taking care of my cat, which allowed me to look outward and gave me a responsibility that took my mind off my own problems.

After finishing the book I pulled up a few of the early videos of James and Bob on Youtube and, among the streetside interviews and other clips, I found a vid of James and Bob appearing on a British morning television show.

For the most part the interview went the way you’d expect those things to go: James and Bob were there to promote their book, James gave Bob a treat in exchange for a high-five, and the questions were rote.

All except one, when the male anchor turned to James and asked him if he’s thought about what he’ll do when Bob dies.

As his female co-anchor stared daggers at the man, James swallowed, hesitated, and said he doesn’t like to dwell on that thought, that he prefers to focus on the moment, being grateful for having Bob in his life and appreciating him.

At the time the eventuality of Bob’s death seemed remote. No one was sure how old Bob really was, but veterinarians estimated he was eight or nine years old.

Bob’s fans are legion: They lined up in their hundreds and thousands for his book tours, they sent thousands of scarves as gifts to the orange tabby and they made him the most celebrated cat in the UK.

Now they’re flooding The Big Issue with condolences and letters about Bob, and we hope James takes comfort from the fact that his little buddy touched so many lives.

“There’s never been a cat like him. And never will again,” he said. “I feel like the light has gone out in my life. I will never forget him.”

For the rest of us, it’s a reminder that our cats are only with us a short while, and that there will come a day when we wish they’re still around to annoy us by jumping on our keyboards or rousing us from sleep with urgent meows for breakfast.

Appreciate them. Love them. And pay attention to them, which is all they really want from us.

6 thoughts on “RIP Bob: The Street Cat Who Saved Lives”