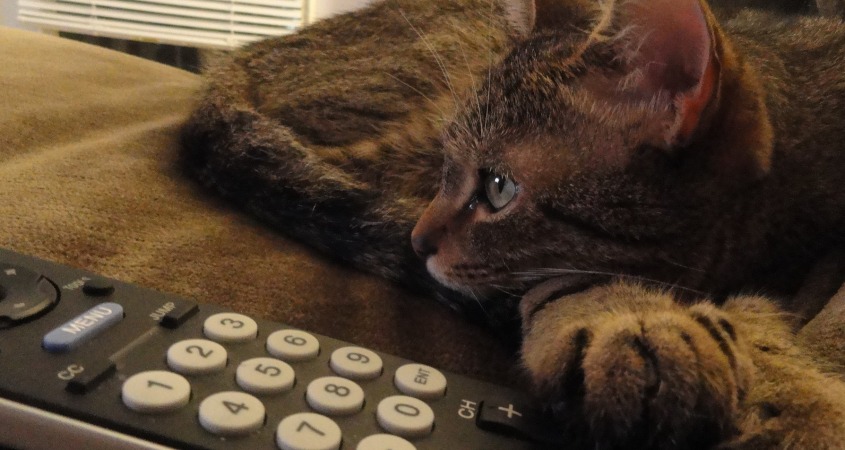 At first, Buddy wouldn’t look at the TV.

I’d pulled up a live feed of a nature cam on Youtube, hoping my cat would be drawn to it by the sounds of bird calls and the sight of vividly-plumed orioles and robins alighting on a feeder, but he just didn’t seem interested.

Leaving the stream on just in case, I went back to my writing, then checked on the little guy again 20 minutes later to find him glued to the TV, sitting close and staring up like a small child watching Saturday morning cartoons.

Buddy was watching a quintet of Bluejays pick seeds from a tray feeder in Ohio, his eyes following the quick movements of the birds while he chirped in excitement.

The channel, Bird Watching HQ, is one of dozens catering to a rapidly-growing segment of YouTube’s viewership: cats.

In retrospect it seems like it was inevitable that cats — the stars of innumerable YouTube videos viewed billions of times on the platform — would become viewers too.

Indoor cats get a visceral thrill from watching birds and small mammals the same way people do while watching thrillers, horror flicks or adventures: It’s a way to get adrenaline flowing in a safe environment.

For Scott Keller, the proprietor of Bird Watching HQ, cats weren’t his intended audience, and the fact that felines love his channel is a happy coincidence. It started as a blog “about how to attract wildlife to your backyard,” he said, prompted by how much he enjoyed taking his kids and his dog for walks near his home in Ohio.

“The live cameras were added in September 2018 to show the specific feeders and food that I was currently using,” Keller said. “I was certainly not thinking about entertaining videos for cats.”

Keller now has four live streams for viewers — human and feline alike — to get their nature fix: Two are set up in his backyard in Ohio, one in California is run by a partner whose feeders are frequented by hummingbirds, and the last is in an animal sanctuary in the Czech Republic. The operator of the California cam goes through between 50 and 100 pounds of sugar a week to keep her feathered guests happy,  Keller said, and the European bird cam often captures unexpected visitors.

“It has actually been a great way for me to learn the birds of Europe,” Keller told us. “We have even seen owls catching mice at night here.”

If you’re wondering whether it’s a good thing to introduce your cat to TV and Youtube streams, veterinarians say there’s little downside.

“It won’t hurt your kitty’s eyes, so you don’t have to tell Fluffy not to sit too close to the TV,” veterinarian Jillian Orlando told VetStreet.

The only real danger, Orlando said, is your cat getting a little too stimulated and potentially charging at the TV to go after the on-screen birds or rodents. Most cats won’t, but if yours is the type to charge head-first into a window screen after spotting a bird outside, then you might want to keep an eye on kitty as she gets her fix.

The topic’s been the subject of academic research as well, with a 2007 study concluding TV was effective in relieving the boredom of shelter cats who didn’t have windows to gaze out of. While cats don’t see colors as well as we do, videos featuring prey animals hold “enrichment potential” for indoor cats, the authors concluded.

As for the phenomenon of bird-watching videos and channels created specifically for cats, Youtube is well aware of it. Content tagged “videos for cats” was viewed more than 55 million times on Youtube in 2019, Youtube trends and insights lead Earnest Pettie told Wired.

That actual number of feline viewers could be much higher, since it doesn’t count content like Keller’s, which isn’t created for cats but has nonetheless reached them as an audience.

As for Keller, he believes indoor cats and humans enjoy the videos and cameras on his channel for many of the same reasons.

“I have also heard from a lot of people that can’t go outside anymore, such as in a retirement home, with disabilities, or special needs children that are using the cameras to get a glimpse of wildlife each day,” Keller said. “There are also many people that are sitting at their cubicles at work during the week that just need some natural sounds.