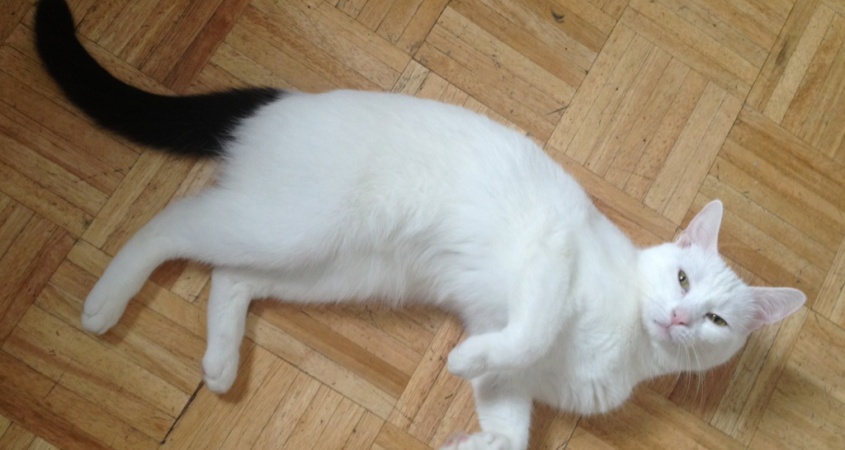 I was driving home on Tuesday night, just about to leave the city limits of White Plains when I saw a cat laying in the road.

I swerved to avoid the cat, saw motion out of the corner of my eye, and pulled over on the nearest side street. There was more traffic behind me and I held my breath as I approached, worried that one of the passing cars would drive over the injured feline.

Using my iPhone as a flashlight, I finally got close. The poor cat was dead. There weren’t any obvious injuries, but his mouth was filled with blood. In retrospect I believe the movement I saw earlier was just the wind blowing his fur.

I picked him up, carried him off the road and set him down on the grass near a street sign. Then I called the police.

He was well-fed and well-groomed, with a striking coloration — medium-length fur that was pure white except for a single black stripe on his tail.

This was someone’s beloved cat, and that person was going to be rattling a bag of treats and calling out for kitty to come home, wondering where the little guy had gone.

Someone hit or drove over that beautiful cat and kept driving.

It’s one thing to know the statistics, to understand in the abstract that outdoor cats only live three years on average while their indoor counterparts live an average of 16 or more years, and quite another to see a dead cat up close with my own eyes, left there as roadkill.

Many people labor under the assumption that cats belong outside as if it’s their natural habitat. The truth is, cats don’t have a natural habitat. As domesticated animals they’re no different than dogs, pigs or cows — the process of domestication has rendered them human-dependent. They’re genetically distinct from their wild ancestors, molded over thousands of years to be companions to humans.

Domestic cats aren’t as swift or agile as wildcats. While they retain some of their wild instincts, they’re ill-equipped to deal with danger.

Life as a feral or stray is tough, brutal and short. Some can survive for a short while. Most don’t.

Please keep your cats indoors and safe from the many dangers of the outdoors.

Note: The featured photo at the top of this post is not a photograph of the cat I encountered, but a similar-looking cat. Header image credit /u/phlebotinum/Reddit.