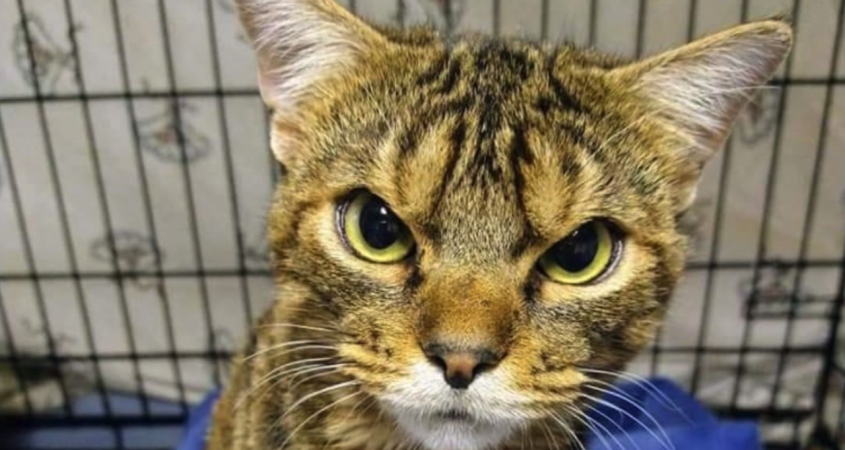 A scowling street cat dubbed Giggles has found a new home thanks to his mean mug.

The tabby cat with an unforgettable glower was found roaming in Streetsboro, Ohio — a small city about 20 miles northeast of Akron — and had ticks as well as a wound from a cat bite, according to staff at Riggi Rescue.

After a good Samaritan brought the little guy in, the rescue fixed him up, then snapped a few shots which quickly went viral.

“He’s not mad, he’s actually quite happy, sweet and charming,” Giggles’ rescuers wrote on Instagram. “If he’s angry about anything, it’s because you aren’t petting him.”

As expected, adoption offers poured in, and Giggles already has a home lined up, presumably to someone who’s going to make a fortune on Instagram from his mug.

Then Keep Your Cat Inside!

Iris the cat tips the scales at 7.5kg, which equals 16.5 pounds in the Proper American Way of Recording Weights and Measures™.

The fluffster has become so rotund that she can no longer fit through her cat flap. But her humans, who live a few miles south of Exeter in the UK, think the problem is their neighbors, so they’re “pleading” with people in their neighborhood “not to feed the overweight feline,” the Daily Mail reported.

“She’s getting bigger and bigger,” Sheena Wilson, Iris’ human, told the newspaper. “We cannot keep her indoors. Her diet, as you can see, is not going very well.”

Iris can only manage to get her head through the cat flap now, “so she can only use it to play peek a boo and can’t fit the rest of her in it,” Wilson said.

But Wilson also told the newspaper Iris is a “diva” who demands attention, so we’re left to draw the obvious conclusion: Wilson and/or other humans responsible for Iris are letting her out every day, since she can’t get out on her own.

Iris “pretends to be neglected” and fools neighbors into thinking she has “an empty tummy,” Wilson said.

As much as Wilson may want to outsource supervision of her cat’s diet, it’s hard to believe anyone thinks Iris is underfed.

We sympathize, and we also know there’s a simple solution: Keep the cat inside. You can’t control your snack-dispensing neighbors, but you can cut off your cat’s access to them — and keep her safe from traffic and all the other dangers of the outdoors.

We wish good luck to Iris and her owners.