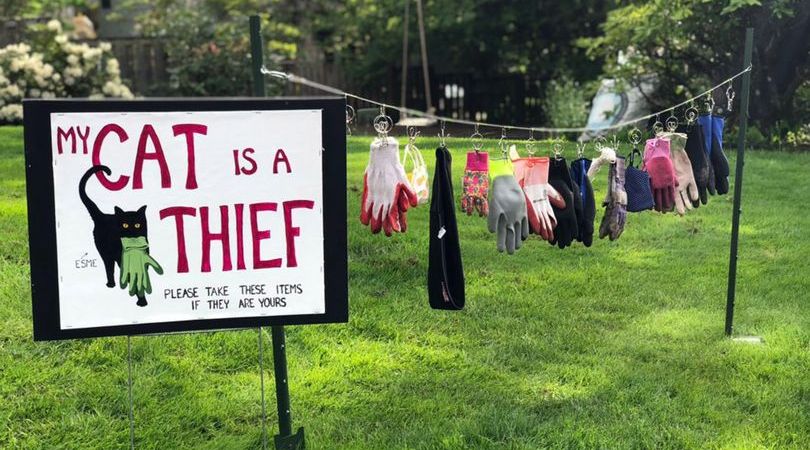 Esme the cat loves bringing gifts back to her human, so when she started bringing home inanimate objects instead of prey, owner Kate Felmet lavished her with praise.

“When she brings them, she comes to the back door and yowls, like ‘Wooooar!’ until I come and tell her she’s done a good job,” Felmet explained.

While Felmet’s glad her three-year-old kitty had stopped going after living creatures, the sheer volume of stuff Esme’s brought back — and her singleminded devotion to collecting it — prompted the Oregon woman to find a way to return the items to people in her neighborhood.

Felmet found a solution when she constructed a cat-shaming lost and found in her front yard, marked with a sign that reads: “MY CAT IS A THIEF” with the stolen items hanging from an attached clothesline.

The sign has a well-drawn likeness of Esme with a glove in her mouth, and a smaller line of text that reads: “Please take these items if they are yours.”

So what does Esme steal? A little bit if everything, apparently.

The most popular objects of her pilfering exploits are gloves and masks, but the little cat burglar has gotten her paws on “several bathing suits, knee pads, rolls of tapes, packages of paint rollers and lengths of fabric.”

“Esme’s thievery began last spring – she brought home 11 masks in one day,” Felmet said. “I was so delighted that she wasn’t bringing me birds and she got a lot of praise – and maybe a few treats for the gifts that weren’t recently alive.”

Esme’s a completist: If she steals one glove, she must have the other.

“She brings them separately but almost always goes back to get the second glove,” said Felmet, who is a medical doctor.

“As soon as I put the sign up, she went for a week of not bringing me anything,” Felmet told WKRG, the local CBS affiliate station. “I had the impression she was a little mad about it.”

7 thoughts on “Oregon Cat Is An Accomplished Kleptomaniac”