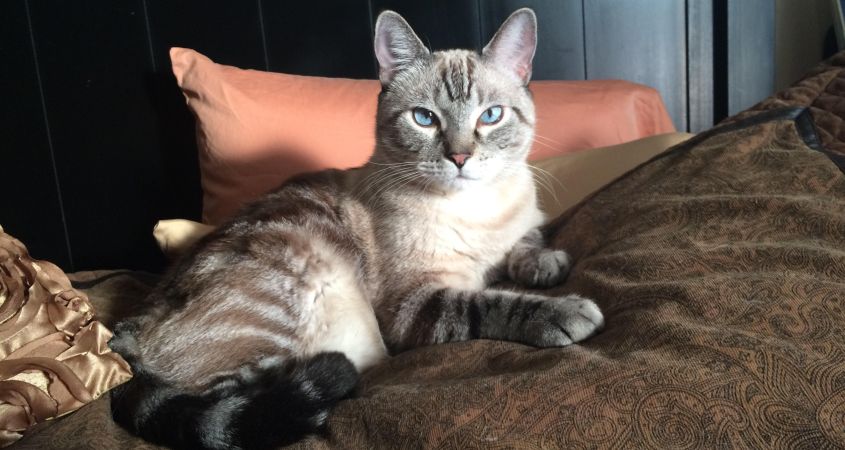 Bowie’s origin story: “I’d been without a pet for a couple of years, and woke up on a particular morning with the idea that ‘I’m going to find cat today,'” reader KC says. “I’d thumbed through no more than just three or four listings, and at the sight of a single pic I knew I’d found the one!”

“From the time stamp on the post I could see it had only been up for ten minutes. I called the number and the woman on the other end said, ‘Man, you’re fast!'” KC writes. “As it turned out, though, one person was even faster, and the four month old kitten had already been promised — on the condition that the woman called back in the a.m. to confirm. If she didn’t, he’d be mine.

“As luck would have it, I picked him up the next morning, and the love fest is still on fifteen years later!”

At that point, Bowie was Chloe: The family adopting him out thought he was female, then decided to part with him when they realized they were wrong. KC, who was a fan of David Bowie, named the young kitten after the king of glam rock.

“I figured something that sounded similar would make no difference to him, so, I almost went with Joey. Once Bowie occurred to me, though, I knew that was it!”

Bowie’s favorite things are his human, his sister Phoebe, eating delicious yums, napping, and getting massages fit for a king — the little guy likes to purr, knead and have his ears rubbed at the same time.

“My favorite part of the story is also the craziest,” KC writes. “When the owner mailed me some paperwork with her vet’s info., etc., a few days later, I was shocked to read that my new pal and I actually shared the same birthday!!! Icing on the cake, really, that only served to confirm the match was meant to be.”

Would you like to see your cat featured on Pain In The Bud? Get in touch here and tell us all about your feline friend.

5 thoughts on “Meet Bowie the Cat!”