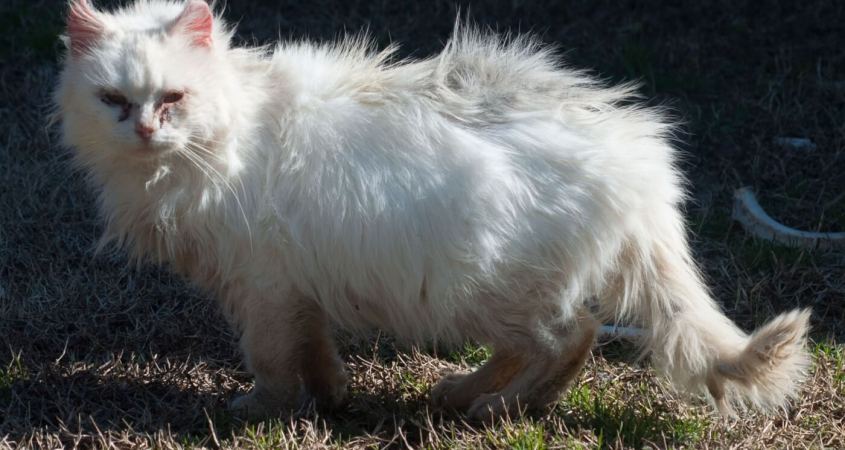 What would you do if you encountered a hungry, injured feral cat hiding under a car near your home?

If your first thought is to help the poor little one, enlist the aid of a local rescue and get the cat some much-needed veterinary attention and food in its belly, congratulations: You’re a human being with a conscience.

One New York Times columnist, however, thinks the solution is to indulge in a fantasy about murdering the innocent animal, of using a weapon she doesn’t own and soundly disapproves of to wipe it from existence.

When Margaret Renkl saw the “ragged, battle-scarred tom, thin but not emaciated, with one eye that didn’t open all the way,” her first thought was to kill it, not help it.

“If I owned a gun, I swear I would have shot that cat,” Renkl wrote in her Aug. 3 column, titled “Death of a Cat. “I would have chased that hissing cat out from under the car without a thought and shot it as it fled.”

Imagine: An effete, 60-something, morally self-satisfied woman playing Charles Bronson, standing over the corpse of a cat and slipping a still-smoking pistol into its holster before heading back inside to tweet-lecture the unwashed masses on civil rights, COVID etiquette and respect for wildlife.

The staff of the New York Times really seems to be working overtime to prove it’s tone-deaf and hypocritical: It wasn’t so long ago that a Times columnist tut-tutted those who disapprove of breeding and selling $20,000 designer cats while millions of homeless animals are euthanized annually.

Times columnist Alexandra Marvar even went so far as to praise people who use their wealth and connections to flout laws against poaching illegal wildlife, reminiscing about the days when “wild cat companions were were associated glamour, class and creativity.”

“Salvador Dalí brought his ocelot to the St. Regis. Tippi Hedren lounged with her lions in her Los Angeles living room. Josephine Baker’s cheetah, collared in diamonds, strolled the Champs-Élysées. In their time, these wild creatures made chic pets,” Marvar wrote.

So why does Renkl hate cats? Because she’s read bunk scientific research that claims cats kill billions of birds and small animals every year:

I was thinking of the first nest the bluebirds built this spring, the one in which not a single baby survived. I was thinking of the gravid broadhead skink who would lie on our stoop every afternoon, warming her egg-swollen body in the sun. She disappeared one day to lay her eggs and guard her nest, I assumed, but now I wasn’t sure. I was thinking of the chipmunk who lives in a tunnel under our stoop and of the little screech owl, its feet holding down some small prey, its eyes glowing in the infrared light of our trail camera.

The more I thought about those vulnerable creatures, already crowded out by construction and starved out by insecticides, the angrier I got at the feral tom. In truth, I would never kill a cat, but I can surely hate one with a murderous rage. A person who has spent a quarter-century trying to create an oasis for wildlife can go a little mad when a cat shows up in the photos on her trail camera.

Note that Renkl didn’t actually see the starving cat kill those birds or squirrels. She simply assumes that a bird who doesn’t return to her glorious backyard oasis has been gobbled up by evil felines. Her rage is prompted by emotion and assumption, not fact.

She doesn’t have a negative word to say about the construction and pesticide industries either, reserving her “murderous rage” for a raggedy cat just trying to survive because she read studies claiming cats are furry little Adolf Hitlers, exterminating birds one bloody feather at a time.

We’ve talked about those cat-blaming studies here on Pain In The Bud: They’re sloppy meta-analyses of earlier studies using plugged-in, arbitrary data and dubious numbers from questionnaires to arrive at the conclusion that cats kill as many as 20 billion small animals in the US alone.

It’s cherry-picking at its worst, beginning with a pretedermined conclusion and inventing, massaging and selecting “data” to support that conclusion rather than doing the hard work of collecting authentic data and honestly interpreting the results.

The researchers who published those studies should be mortified to have their names attached to them. They’re engaging in activism, not science.

We’re not the only ones who have a problem with the aforementioned studies. A team of scientists and ethicists examined the claims and “found them wanting,” blaming the sloppy science of those studies for the claim that “cats are a zombie apocalypse for biodiversity” and the subsequent war on cats in countries like Australia, where some states offer $10 a scalp for people who kill adult cats and $5 a scalp for kittens.

What kind of twisted logic compels people to kill kittens in the name of protecting animals?

The primary and most-cited studies claiming cats kill billions of animals “take specific, local studies and overgeneralize those findings to the world at large,” the critics wrote. The studies ignore “ecological context,” bury contrary evidence and ignore mitigating factors, like the fact that cats often prey on other animals that kill birds.

In other words, they start with a pre-determined conclusion and shape the dubious data to fit, as I wrote above.

And so the claim that cats kill billions of birds and small mammals is repeated as fact by an unskeptical press, and ostensibly serious people, like the Smithsonian Migratory Bird Center’s Pete Marra, advocate a “nationwide effort to rid the landscape of cats.” That’s a nice way of saying he wants to kill hundreds of millions of innocent domestic cats because he doesn’t want to see the glaring flaws in studies about the species’ ecological impact. (Marra also compares feral cat advocates to tobacco companies and climate-change deniers, which is an astounding claim from a man whose name is synonymous with manipulating research data to support his views.)

This is absurd stuff, akin to the extermination of cats in the Dark Ages prompted by stories alleging cats were the agents of Satan, witches and heretics, and central figures in devil-worshiping ceremonies. The only difference is the people of the Dark Ages, who didn’t know better, were driven by religious belief. Their modern day counterparts are driven by religion masquerading as science.

This is what sloppy research has wrought: An army of self-professed animal lovers stalking the dusty plains of Australia and the backyards of the United States, shooting domestic cats with pistols, bows, air rifles and pellet guns.

These people don’t seem keen on thinking about how they justify the callous culling of hundreds of millions of domestic cats — intelligent, sentient animals who have feelings — in an unproven effort to protect birds and rodents.

Renkl ends her column by telling us she got her wish, in a way. A few days later, a neighbor’s kid came to her for help after some wildlife-loving do-gooder poisoned the poor animal. As she watched the tomcat convulse and twitch in an agonizing death, Renkl stopped to take pity…on herself.

“For weeks I have been trying to understand my own tears in the presence of a dying cat I did not love,” she wrote.

To her credit, by the end of the column Renkl does acknowledge her rage is misplaced, generously allowing that a cat trying to survive isn’t evil. But that concession comes after several hundred words painting cats as the driving force behind the destruction of wildlife and presenting flawed studies as credible science.

The damage has already been done.

22 thoughts on “NYT Columnist: ‘If I owned a gun, I swear I would have shot that cat’”