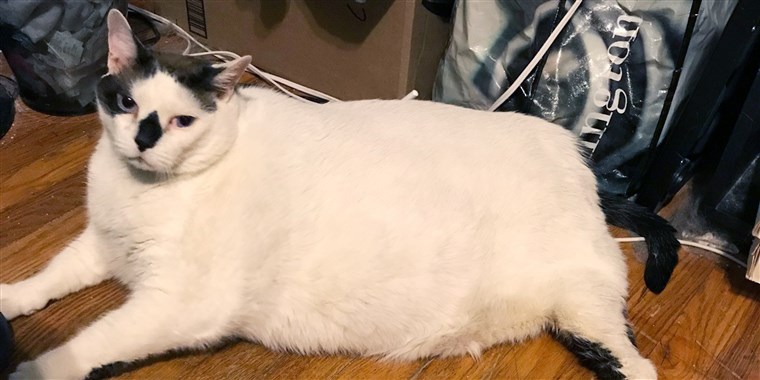 Barsik the cat made headlines about five months ago when he was surrendered to a Manhattan animal shelter at a whopping 41 pounds.

The five-year-old was kept in the shelter’s office because he couldn’t comfortably fit into a standard cat cage, and a regular carrier couldn’t contain him either so he was carted in a stroller, according to the New York Post.

To add insult to injury, when staffers at the shelter wheeled Barsik inside, an amused visitor dug out her cell phone, laughed as she snapped a few photos and asked: “Did he eat another cat?”

Barsik has come a long way since that depressing day.

The big guy has been in the foster care of Angelique Iuzzolino of New York’s Anjellicle Cats, and he’s been steadily dropping weight.

Barsik weighs 33.3 pounds, according to Iuzzolino, who has been posting updates on Barsik’s Instagram. He’s still extra chonk, but he’s no longer in danger of matching the 46-pound Guinness record for a cat. Most importantly, he’s making progress.

He certainly looks a lot happier than he did when he was abandoned by his former people:

Barsik will be up for adoption, but if you’re interested in the big guy you’ll have to wait. He’s got a few more pounds to lose before he goes to his forever home.

UPDATE: Barsik is now up for adoption! Prospective servants have until Nov. 10 to fill out an application.